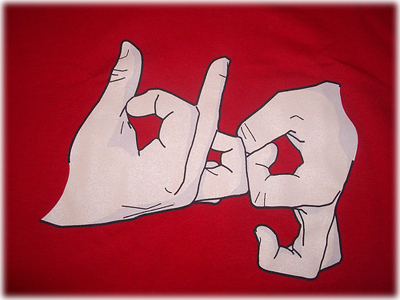 Blogging, however much I love the concept of it, I positively loathe having to actually get down to doing it.

While I have never been a serious blogger, I have ventured deep enough into the territory of blogging so as to not get mired in the veritable swamps of texts, pictures, comments, links, permalinks and whatnot.

This post, on another brand new blog that I am embarking on for the Humphrey year, will show you, dear reader, how hopelessly addicted I am to blogging, while being the most unsustainable guy romping around on the blogosphere.

To the blogging world, I am a prospector who hits gold, but gets easily distracted by a whole plethora of other things that glitter. 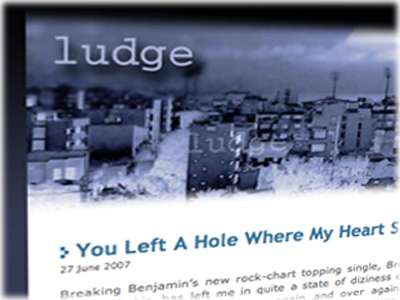 My first blog was way back in 2006, on the blog stylized after the name I adopted for most of my online social escapades.

The first post was just one line, which read:

This is like my first blog ever on this thing!

This was a very experimental blog, aimless, directionless and floating around every which way like a diluvian ark that had to have two of everything on board.

One or two few commonalities did emerge here, one being pictures of food and more FOOD: the other, incessantly LONG posts.

There was a smattering of news, creative writing, like short stories and *gak* poems, pictures of travels and events, some artsy graphic stuff, more food, and even more food!

One of the first posts that I wrote way back then still resonates deeply:

After much persuasion from someone who works a couple of floors above me, (not mentally, mind u), I finally decided that I should also start a bloggable bloggy blog.

Thus, I’m thinking that what I have here is not a true blog, as I have little idea what and what not to write. People talk about how their thoughts spew out of their minds right onto their web logs, but for me, this process seems impeded by a huge block of granite between me and the ever daunting keyboard.

The dilemma I addressed then still looms ominously every time I sit down to write a post, and end up eyeing the keyboard like it was a rhumba of rattlesnakes, each key a potential fang waiting to immobilize me into writer’s bloc. 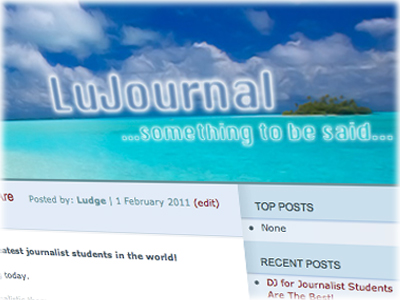 As ludge.wordpress.com went into a coma in 2007, I was required to start up a new blog for the Masters program I was undergoing then.

Titled LuJournal, this was a blog that mainly focused on stuff relevant to the Maldives that was appearing in foreign online media.

One of the posts here, “A Maldives in Australia” was picked up by an online news site from the Maldives, and generated some exposure to my blog.

Dhivehi Observer referred to my post and did an article on protecting the brand name Maldives, which did get some media attention back home.

There was even a Facebook Group called Protect the Brand Name ‘Maldives’ following this, for crying out loud.

And that was fun, if anything!

I did a follow up post, on how There’s a Paris in America Too, which kind of killed the hype that I unwittingly created, when realisation hit home, for those at home. 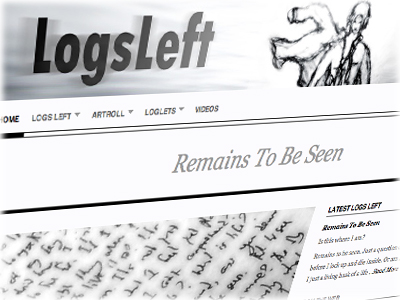 I decided to go the Stephen King / Richard Bachman route this time around, and see if being totally anonymous would help me garner any interest in the content I was going to post.

Remember that this route would not allow me to blatantly abuse my existing connections on Twitter and Facebook to increase traffic and consequently boost my ego.

I also dipped into a wholly undeveloped skill of sketching, which accompanied my posts there.

While there were an increasing number of people who visited the blog, the content that I was posting was effectively, uncommentable, as no one was commenting!!!

Fellow blogger and super hot awesome friend, Biskoadhu, on finding that LogsLeft was indeed me, did leave a few comments out of the goodness of her heart.

And so, it ran its course, and as is wont to happen, I was distracted once again.

This time by the glitter that emanated from the World Cup 2010. Go HOLLAND!

LogsLeft did help me though, as in it allowed me to see how social media, especially Twitter, could be utilised to lure people in to read up on my woes, which is always a good thing, relative to me of course.

Lecturing on Blogging, A Stern Approach or Not? 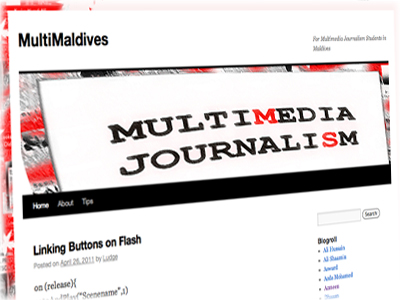 The Dean from the Faculty of Arts at the Maldives National University asked me to lecture on multimedia journalism to the journalism diploma students.

When I found out that there was a blogging component in the module, I freaked!

How do you even teach about blogging? This was indeed pedagogy at its worst.

So I started up a wholly instructional blog, MultiMaldives, though it’s all nonsense there for anyone who stumbles upon it.

One thing to note here is the Blogroll on the right, which lists the blogs of my students, and they came up with fantastic, thematic blogs.

One such is by Azmeen, a prolific football (soccer) commentator in Maldives, who created a sports blog in the class, that is quickly taking on the characteristics of being a website, with the amount of content and categorisation he has worked into it.

Full marks he got, aye!

I even had to take a few classes on blogging for the faculty there, and that was a whole new experience for me.

The Power of Three 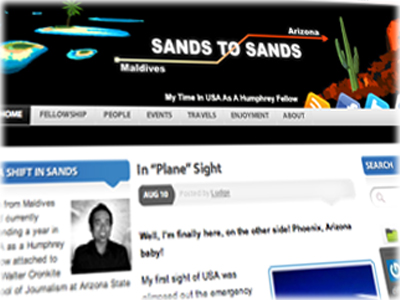 And now, I am on it again, and believe me, this time, it’s on full force!

For the Humphrey year, I decided to do a blog even before I came down here, to document the experiences I am going to have in the US, named Sands to Sands.

Little did I know that blogging would be the mainstay for the classes that I would be enrolled in here.

So it’s not just Sands to Sands now, I am required to blog for the Humphrey Fellows at Cronkite blog, which I am really looking forward to.

In addition to this, and which I think is going to be the most taxing of the three, is the blog I am supposed to write for the Digital Media Entrepreneurship course I am taking.

For this, I have decided to blog on digital and web based information and services created specifically for the Maldives.

So there you have it, this could be my biggest blogging blunder in the making, three armies to coordinate and take to the battlefield of the blogoworld!

So, this time around, is there any wayward glitter to distract me?