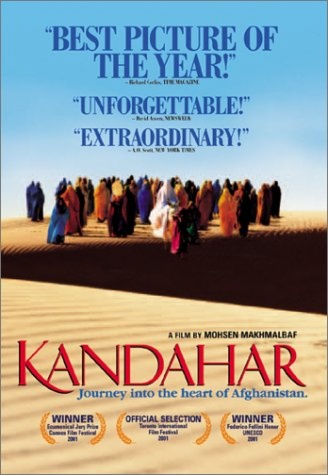 Kandahar.. “the Sun behind the Moon.”

This is one of my favorite films: “Kandahar”: or “A journey to Kandahar” or “the Sun behind the Moon”.

The story of the film can be summarized in the insistence of Afghan – Canadian woman who returned to Afghanistan to rescue her sister who sent her a letter telling her that she will commit suicide on the last solar eclipse of the millennium. 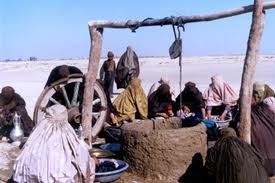 Through the very hard and tough journey of the star in the desert and very poor areas in Afghanistan, the film indirectly draws the attention toward the miserable life of the people who were living under the rule of the extremist Islamic movement of Taliban. How these rulers, in the name of the religion, do what has no relation to the real religion. All what they do is to impose on women to cover their faces. Their curriculum in education is to learn students how use weapons to fight and kill the infidel / unbeliever world around them. The industry they are working in is manufacturing guns! Doctors cannot see women directly but behind curtain. Moreover, women do not complain what they suffer from, as their voices are roughness / forbidden to be heard by stranger men! That’s why every woman accompany with her one of her male close relatives to speak to doctors or depend on their young children to talk to doctors on behalf of them.

The amazing lesson of the film is that it is not only her sister that needs to be rescued but also millions of people who live in ignorance and darkness under the ruling of persons who do not know any thing about the real religion. All what they do is distorting the religion with their fool and irresponsible behaviors.

In 2001, the film displayed in Cannes Film Festival, but had no attention.

After the 9/11, it was widely shown around the world and won several international prizes.

A worth-watching film, is not it?