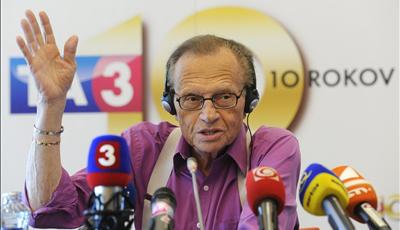 This week I discovered interesting news, that Larry King was coming to Slovakia. Of course, for us, it is a big deal. One of the most famous hosts in history of CNN came to our little country for whole 4 days! He accepted the invitation of Slovak news TV TA3 to be a part of their 10 year anniversary celebration. During his short visit, however, few funny things happened.

First of all, I was really amused by the fact that after finishing his career as a CNN host, he started to entertain people as a stand up comedian! At the age of 77! To me it seems even funnier as when I saw Bill Clinton playing saxophone. He said that he is more excited to make people laugh than to make an interview with the president.

When he came to Bratislava (capital of Slovakia if you still don’t know:), he said that the only Slovaks he knows are Vaclav Havel (former president of Czechoslovakia) and Jaromir Jagr (NHL ice-hockey player). The only problem is, that both of them are Czech. This was not his only faux pas on behalf of Slovaks. When our prime minister Mikulas Dzurinda visited his show in 2001, Larry King has mistaken him for Romanian prime minister. You can top that only with George Bush’s quote  referring to Slovakia as Slovenia.

The funniest part of Larry King’ s Slovak trip came at the end, when the University of Skalica (have you heard about it? Me neither!) honored him with honorary doctorate.  Just to let you know, the town of Skalica in Slovakia has a population of 15.000 and nobody has ever heard about any University there . It is a private school and most probably they just used King’ s name for their promotion. One of my friends / journalist of SME daily newspaper wrote on his Facebook status that watching this ‘ grotesque’ he feels like in a Kafka’ s novel.

I am just assuming, that Larry King does the stand-up comedian job pretty well!