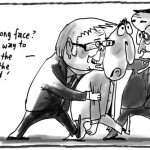 The Newsweek Survey has found out that Americans are pessimist about their country as 76% of them think that the ocuntry is on the wrong track and 70% think country was 70% better than 25 years ago to address the problems.
While reading this survey I am reminded of the situation in Pakistan when we always come across this question that what would be the future of Pakistan.While doing many programs on this topic especially with the young generation of Pakistan,I was always astounded with the fact that the youth has come up with the sense of optimism about the future of Pakistan,even though we are facing many challenges,but they are adamant that we have bright future.Overall,the general masses are going through the same kind of pessimism revealed in the Newsweek Survey found among Americans.For me its very surprising that the Americans are also going through the pessimism I have seen among the public of Pakistan.The difference between the pessimism of an American and a Pakistani is that the former is not witnessing any war or law and order situation in the country while the latter is surrounded by the problems of law and order,war,price hike,power outages and so on.Even then I think Pakistan has a ray of optimism when the youth there envisage the country as propserous by working for the betterment of the people.
In this time when pessimism is dominating the affairs of the nations ,the time has come to get united as the nations and fight against this pessimist approach as only the people have the power to defeat it with overwhelming sense of optimism.