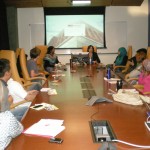 If I am not wrong in calculaitng the hours I spent today with Kim Barker,a reporter who works now for Pro Publica-they accumulate to approximately five hours.I first met her today in Richard Ruela’s class where we talked about the coverage of US Media about global issues.Afterwards,I had a personal meeting with her lasted for about 35 minutes before Humphrey Seminar,just to know what she wanted to discuss and how would we run the class.I was talking to her during those 35 minutes some special things about my country and Afghanistan,where she stayed for 5 years.

It was the first time during Humphrey Seminar that we’ve had a guest speaker.Kim has also written a book ‘The Taliban Shuffle’after coming to the US about her experience of reporting in Afghanistan and Pakistan.Many of the issues discussed in the class were totally new to my fellows especially the feature she talked about the pinching of women in Pakistan by men in the public,as she had also faced it.As of result of bringing into the disucssion was quite different from me,as none of my fellows has shared such kind of feeling about women going through such kind of treatment in the hands of men.

I never knew that the two hours session would go such smoothly ,all the fellows were involved and everyone really admired Kim for her experience in Pakistan and Afghanistan.For me it was really shocking to read some features about Pakistan that she has written in her book but I am glad that someone has written about them.