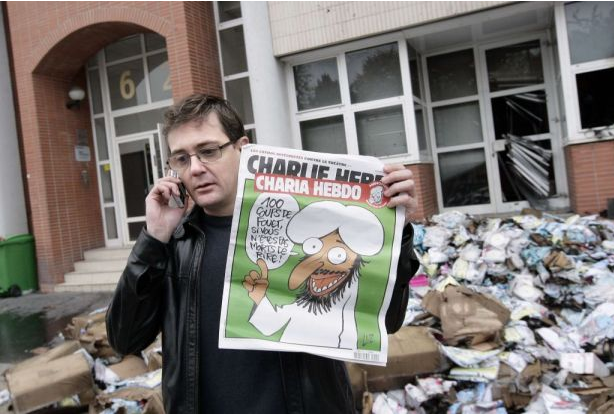 I figured nobody wants me to just copy/paste our essay into the blog.

[You can email me if you really want to read the essay; or, to save time, here is a helpful timeline of the events]

Instead, I’ll re-introduce two issues we didn’t get chance to discuss at length in the seminar: Are there more appropriate ways to do satire on sensitive issues? And: How should a publication respond to a situation like our case study?

The drawings generated angry protests from Muslim citizens and organizations across the continent, including government petitions and a boycott of all Danish products that continues in some places today. As we discussed in class, France in particular became embroiled in the conflict as well, with Le Monde becoming as much a face of the controversy as original publisher Jyllands-Posten. The question became “Should we republish?” instead of “Should we publish?”

In the United States, the response was remarkably muted. European publications took much more public and stalwart stances in solidarity with the Danish paper. The New York Times did not republish the cartoons, for example.

Neither did satire superpower The Onion, which brings us to that first question from the beginning of the post: Are there more appropriate ways to do satire on sensitive issues?

The Onion did not republish the images behind either the original controversy and the 2011 Charlie Hebdo controversy we talked about in class. Instead, it did fake “man on the street” quotes about the controversies: 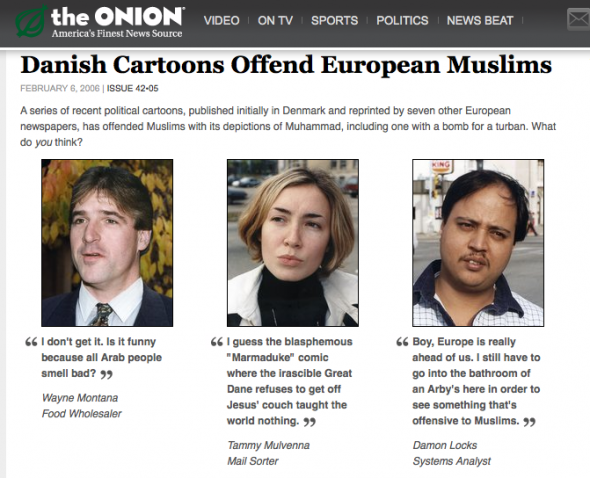 As you can see, it’s commentary about the commentary. It’s making fun of the fact that these drawings have become such a heated conflict to so many people. And it’s giving both sides the opportunity to realize the hypocrisy of the moment without calling anyone in particular out–and most important to our conversation, not stoking the fire by republishing the Muhammad drawings.

The Onion repeated this decision when Charlie Hebdo, a French satire magazine, that  published cartoons of the Prophet Mohammad the first week of November 2011. The weekly announced it would release a special issue titled Sharia Hebdo, featuring several images of the Islamic prophet as well as articles explaining and interpreting them. 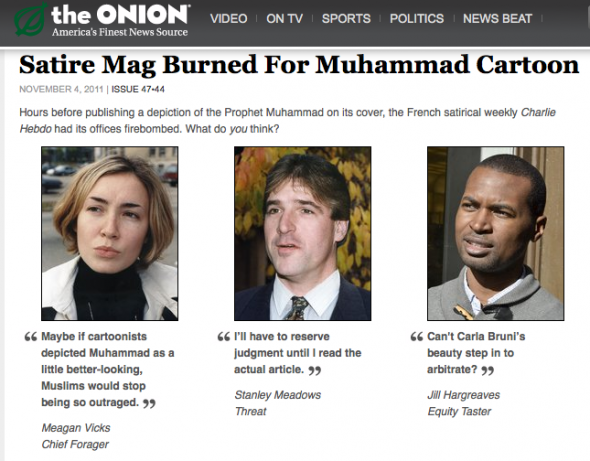 The entire edition was a satire of all previous instances of protest over the use of Mohammad’s image in satire; they even dubbed him editor for the week.
There are many differences between how this played out, versus Le Monde. Retaliation, in the 2011 case, was more direct, and violent: The publication’s building was petrol-bombed a day after the cartoons were published in early November.

All the newsroom equipment was destroyed in the attack, though no one was injured. Also interesting is how Charlie Hebdo responded: It reprinted the cartoon, along with several new ones, in a special edition supplement. Though the satire was directed at fundamentalist Islam, there were also articles written by the staff, stating: “this team defends the ‘freedom to poke fun’.”

This brings us to our final question: How should a publication respond to a situation like our case study?

Withholding our own judgements, we will show you how several publications handled things, and let you decide for yourselves.

Jyllands Posten, the Danish paper that originally called for and published the cartoons, issues a public apology months later. They were still sued by a group of Muslim organizations. The charges were thrown out by Danish court, but not before Jyllands Posten responded with a counter lawsuit against the lawyer representing the Muslim organizations. I think this is a question our group needs to address. Did the publication cross the line in protecting their free speech when it went on the aggressive? (Another reaction: The Western Standard, a Canadian newsmagazine that caught some flak for republishing the cartoons, asks readers for donations for legal fees.)

Food for thought, I hope.

I’m out. Thanks for helping to make my last semester memorable, everyone.