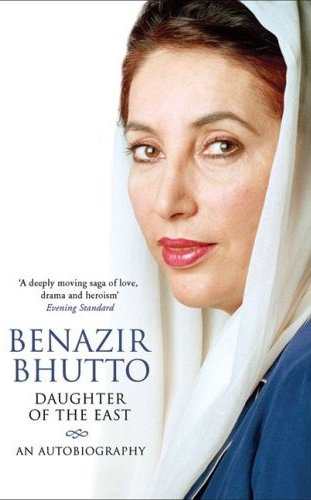 When I read this book two years ago,I was trying to visualize the agony and the hardships that Benazir had to face after the demise of her father,Zulfiqar Ali Bhutto who was not an ordinary man but the Prime Minister of Pakistan.Zulfiqar Bhutto did not die natural death but he was hanged to death by the military dictator General Zia Ul Haq who was appointed Chief of Army Staff by Bhutto.Zia charged Bhutto of conspiracy to murder charge of a political dissident Muhammad Raza Kasuri.

Benazir was the eldest of her three siblings:two brothers and one sister.When her father was imprisoned,she was the one who always uplifted the morale of her family.Her father from her early childhood would treat her as a distinguished child.She also had keen interest in the politics and the conversations with her father about politics was her favorite time spend.After reading this book which revised edition was also published in 2007,I can affirmatively say that Benazir was the born leader.She didn’t need to establish herself as a leader.She was very young,when her parents left the management of all household on her shoulders and she controlled all the affairs very well.Thats why when her father was in jail,he said to her that if something happened to him,she has to be there to fulfill her leader’s duties.

The book is an autobiography of Benazir’s years from childhood until 1988 the year when became the first lady Prime Minister of not only Pakistan but also the Muslim World.She delineated the facts that it was not easy for her to usher into the field of politics in Pakistan,as she mentioned once having warned by someone that politics is not for women.But this can’t be true for Benazir,as she had spent five years in prison after the death of her father.Having gone through all the sufferings that woman can barely think of,she set off for the way into politics.She was in UK before electing as Prime Minister and that was also for her safety,but she preferred to come back and lead the nation.

Her influence and empathy won her the love and confidence of the people,led her to becoming twice the Prime Minister.She many times remarked that she has chosen the thorny way because that was her vision for the country.Her sensitivity to the feelings and hardships of the people of Pakistan has made her the role model for servant leader.Being a woman,even though sometimes she had to go through tough situations as she was pregnant with her first child when there were elections,but she kept working hard during her pregnancy and after that also she participated in the elections.Her exaltation as the Prime Minister was a trend-setter for other women of Pakistan.It was a push for them that they can also do what the dream of doing,without the gender issue coming on their way.She has died but the change that she brought and the influence she has on the hearts of many Pakistanis will always remain as the reflection of true leader.

2 Comments on “Benazir Bhutto”Daughter of the East””