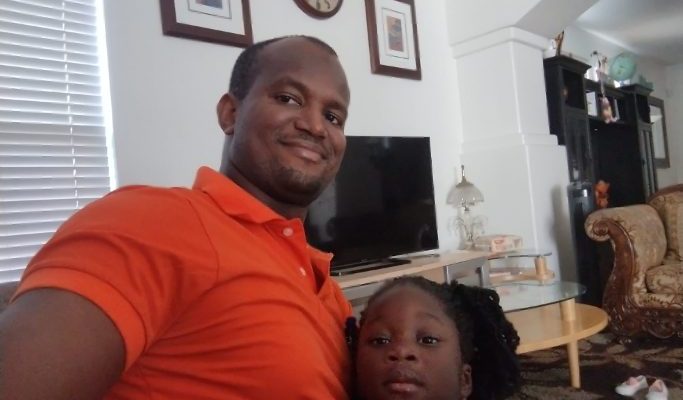 Larisa Tucson is a four year old girl who was born in the Arizona to Sierra Leonean parents, who had immigrated to the States in search of greener pastures. Her mother during her pregnancy developed some complications a few hours before delivery, which resulted in some disabilities for the baby when she was delivered.

‘’If not for the professional intervention of the health workers; Larissa wouldn’t have survived, nor would she have spent her first few hours on earth’’ says her mother Angela.

The medical intervention at that crucial moment saved the mother and baby, but later she has an everlasting impairment that will stay with her for a very long time if not the rest of her life.

I can safely say if similar case were to arise at the main referral hospital, the Princess Christian Maternity Hospital, in the capital of Sierra Leone it would have been difficult for their survival.

Joy amidst her challenge

Unlike other parents who would have felt very disappointed and dejected at seeing their baby in that condition, Larissa’s birth brought joy to the family, to her mother’s side she is the second daughter, but to her father’s she is the first daughter. Her birth brought joy and smile on the face of her father who sees her as her best friend, and no doubt she is because she is the only daughter.

Larissa’s elder brother Festus Larry junior is the first child to his father who is very jovial and the playmate to Larissa. Amidst her physical impairment, she enjoys the company of her brother who once in a while will attempt to pick up a fight with her, but whenever she clenches his hands, he has to ask someone to help him tell her to unclench his arrested hands.

Festus loves his younger sister so much; they are the best companions at home, as they watch cartoon films together and play with their baby toys. Festus understands the mood of Larissa and can interpret it whenever it changes.

Larry Tucson is a Sierra Leonean electrical engineer who came to the United States of America less than ten years ago after marrying Angela who had first come to the US and later filed for her husband to join her. Larissa is their second child, the first one is six years old Festus Larry and is their first child to be born in US soil.

When he is not at work, attending to Larissa is his second job, the reason he most times fixes his work schedule in order to have enough time for his daughter.

He dresses her, feeds her and helps her do her home work every day. This chore according to Larry brings him joy and laughter. ‘’when I see my daughter smile and giggle I feel like I am the happiest father in the world, when she yearns for my hug I have a feeling that nothing can bring in this world.’’  His father finds happiness in giving her the love and affection that she needs, and I can say everyday she receives maximum love, attention and care from her father. It is her father who will take her from the living room, coddle her until she falls asleep; in the morning also it is he who will get her dress prepared after her mother has bathed her. He will bring her down, feed her and take her to school where she will spend half of the day.

Serena is an American social worker who always wears a broad smile, an appearance she needs to help calm the nerves of babies she looks after.  Her looks I believe can change the countenance from somber to joy especially for someone like Larissa who communicates through gestures, and mood.

Larissa has a special table and chair that she uses when doing her studies, eating breakfast, lunch or dinner, and she will detest anyone attempting to use that furniture of hers without her giving the approval even if it is her elder brother Larry junior. This time Serena came with a new tool which she gave to Larissa, the instrument I am told is used to aide her speech and also help her drink juice, water or any other liquid food.

This time Serena came in as usual with her bag which contained her laptop and other gadgets she normally uses to aide Larissa’s speech, drawing or hand movement. She is full of experience, motivation and patience, key characteristic of someone who does this type of job.

Larissa is now four but is still struggling to even make a baby’s step or have a clear speech when compared to many of her age mates. She does her movement through rolling on the floor, she still giggles but struggles to even pronounce her name or that of her father’s,  mother’s or other members of her family. Everybody burst in to laughter when her instructor asked her who I was, and she struggled after several attempts and aide by the coach to pronounce the world ‘’uncle’’ the instructor will first say un then  kul and she kept on repeating it until she finally pronounced clearly the world uncle.

Every week her tutor and social worker Serena visits Larissa at her house to coach her in areas of writing, sketching, or pronouncing words. Like previous visits, Serena was greeted with broad smiles by Larissa, which is one of the features of Larissa and she gives it freely and effortlessly to any one she comes in contact with. Like adults, her smile is a sign that you are welcome to her house and she is ready and willing to embrace you.

When she smiles if you are a first time visitor to her house you will not realize she is physically challenged, and all visitors know her for her radiant smile. What normally adds light to the house is the presence of Larry the elder brother of Larissa who tickles his young sibling in order to hear her laugh. The laugh and smile of Larissa lights the house everyday and everyone looks forward to seeing her smile especially with her bright white shiny teeth which is so conspicuous like the smiling sun at noon.

It was Monday morning and every normal kid is in school but Larissa was at home this day because of the fall break, her grandmother had come from Los Angeles to visit her, and during her stay she served as the baby sitter to help look after her granddaughter. Her presence adds some flare at home, but she and Larissa will almost have a fight every minute.

No sooner she arrived than Larissa’s grandmother welcomed her with a paper having a sketch that surprisingly she had drawn the previous day, testing her knowledge in drawing with little supervision by her father or mother who normally drills her in handwriting and drawing.

In the work she spelt her name and wrote some other stuff that will keep you spellbound. It was unimaginable that this art work was done by Larissa when you think of the difficulty she goes through to move her hands even to seep her juice not to talk of drawing and spelling her name in a full scalp paper.

It is one of the things Larissa likes doing whenever she is at home, she uses different crayons, though her fingers struggle to even get hold of the pencil, but her resolve and determination to get something done is stronger than one can imagine. Whenever she gets hold of an individual or an object, letting it go involves negotiations not force, because if you dare force her to release what she held in her hands believe me you will be unable to do so

This morning Larisa’s grandmother misjudged her when she wanted to take one of Larissa’s pencils without the express permission of Larissa. She couldn’t believe that the little fingers of Larissa could put up that stiff resistance. She took Larissa for granted because of her disability and size believing that she will not resist her when she wanted to take her pencil. Larisa’s grip is indeed with tenacity.

Mohamed Asmieu Bah is a broadcast journalist with 15 years of experience in the field. He started as a reporter at the Sierra Leone Broadcasting Service after he finished high school where he trained to become a radio and television presenter and producer of news and current affairs. Bah works for Sierra Leone Broadcasting Corporation and has presented one of the most popular television programs, “Lunch Time Break”, since 2010. He holds a Master of Science in diplomacy and international relations from Fourah Bay College and is pursuing a Master of Philosophy in political science. In 2013, he was a Reham Alfarra Fellow. Bah was elected as the National Secretary General of the Sierra Leone Association of Journalists in 2019. As a Humphrey Fellow, Bah hopes to deepen his knowledge of journalism, leadership, and governance. He would also like to sharpen his skills in research, leadership, academic writing, media ownership, experience with American media and American governance systems and policies.