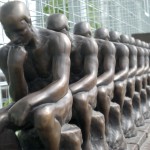 I wonder if public transportation will become more popular among Phoenicians, or cars still will dominate here. It seems that every major city in the U. S. – even not as vast and populated as Phoenix – sooner or later makes its way from car-oriented city to expanding public commuter service. Although first steps – first phase of light rail – were made in Phoenix, public transport system is waiting to be much more improved.

I found only one bus route in Phoenix which runs every 10 minutes – and the majority of routes only run every 30 and even 60 minutes that is definitely inconvenient. Maybe that’s why only very specific types of Phoenicians (and, thanks to U-Pass, ASU students and staff) ride public buses and rail. It is just because if you value your time, you will not use transport that will take you to desired place in an hour or even two.

I like bus system here that runs strictly towards streets in east-west and south-north directions. But only at least ten-minute intervals will make it really reliable.

4 Comments on “Phoenix Public Transport: Complicated Even With Light Rail”