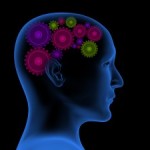 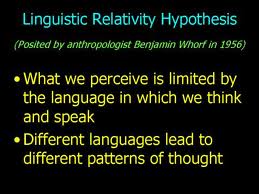 In English, time is linear or spacial. You can fall behind schedule and look forward to dinner. In Mandarin they use these terms along with vertical terms to describe time. Earlier events are said to be sha’ng (up) while later events are said to be xia’ (down), as a spring or a fountain, flowing upward. It is easy to understand how the difference plays a role in secondary language acquisition, but there are theories which take it a step further.

I have always been interested in foreign language, culture and perspective; the theory of linguistic relativity bridges that gap (see the 2 key points, right). I believe that there is a prominent formative quality of language, as there is with many other environmental influences as a child. I agree with that much. The point where my opinion differs comes a little further, where one’s language fundamentally limits one’s capacity for perception. We will all have our own personal bias, but I firmly believe that we, as rational human beings, are capable of more objective observations. The pursuit of new perspectives and experiences are what makes travel and international exchange worthwhile. I cannot accept that by simply growing up in the United States and by speaking English, that I will never be able to expand my mind to the wealth that exists.

The theory does leave one consolation. If I become fluent enough in another language – to the point where I can think and speak in that language – I may be able to follow a new pattern of thought. True immersion. Assimilation. I’m not sure if I would want to take it to that extreme, but seriously learning a second language does mean accepting certain aspects of the culture.