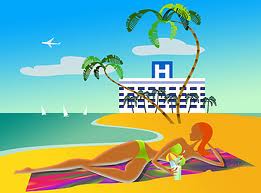 As the economy slows down and the next global crisis emerges, public relations may adjust to these situations by changing its messaging. Many companies once in the business of selling luxury products are now starting to re-focus on affordability.  The meaning of “luxury” that has always represented something expensive, many times snobbish, is being transformed. ”Affordable luxury” is becoming the message that companies are trying to convey to their customers. Some companies are trying to pitch the idea with emotional messaging instead of focusing on a high-end product. Starwood hotel group, for instance, has launched a new campaign for their luxury collection, claiming: “Life is a collection of experiences. Let us be your guide.”

In the tourism industry, this message is more important than ever. Since the global financial crisis in 2008, tourism has declined two to four percent. In fact, the last three years has seen a new form of tourism called “recession tourism” develop. This trend was first identified by American entepreneur Matt Landau
and is defined by low-cost, high-value experiences taking the place of once-popular generic retreats. Enteprenuers generating revenue from tourism should try to attract their costumers with positive messages of high-quality experience for affordable prices. However, according to experts, enterpreneurs shouldn’ t just cut the prices, as this creates a negative impression on customers. Instead, they should focus on creating a positive environment that resonates in a negative situation. It is important to continue to use marketing and advertising so the customers don’ t forget about the particular product or destination. They should have open communication with their customers – most importantly through social media, which is an effective and low-cost tool for attracting an audience. According to the survey, most of the customers are likely to pay the same price when they know the value of a product and communication with them is strong.

No one knows the effect of future recessions on the tourism industry, but it is clear that PR will play an important role in maintaining customers and retaining positive name recognition.