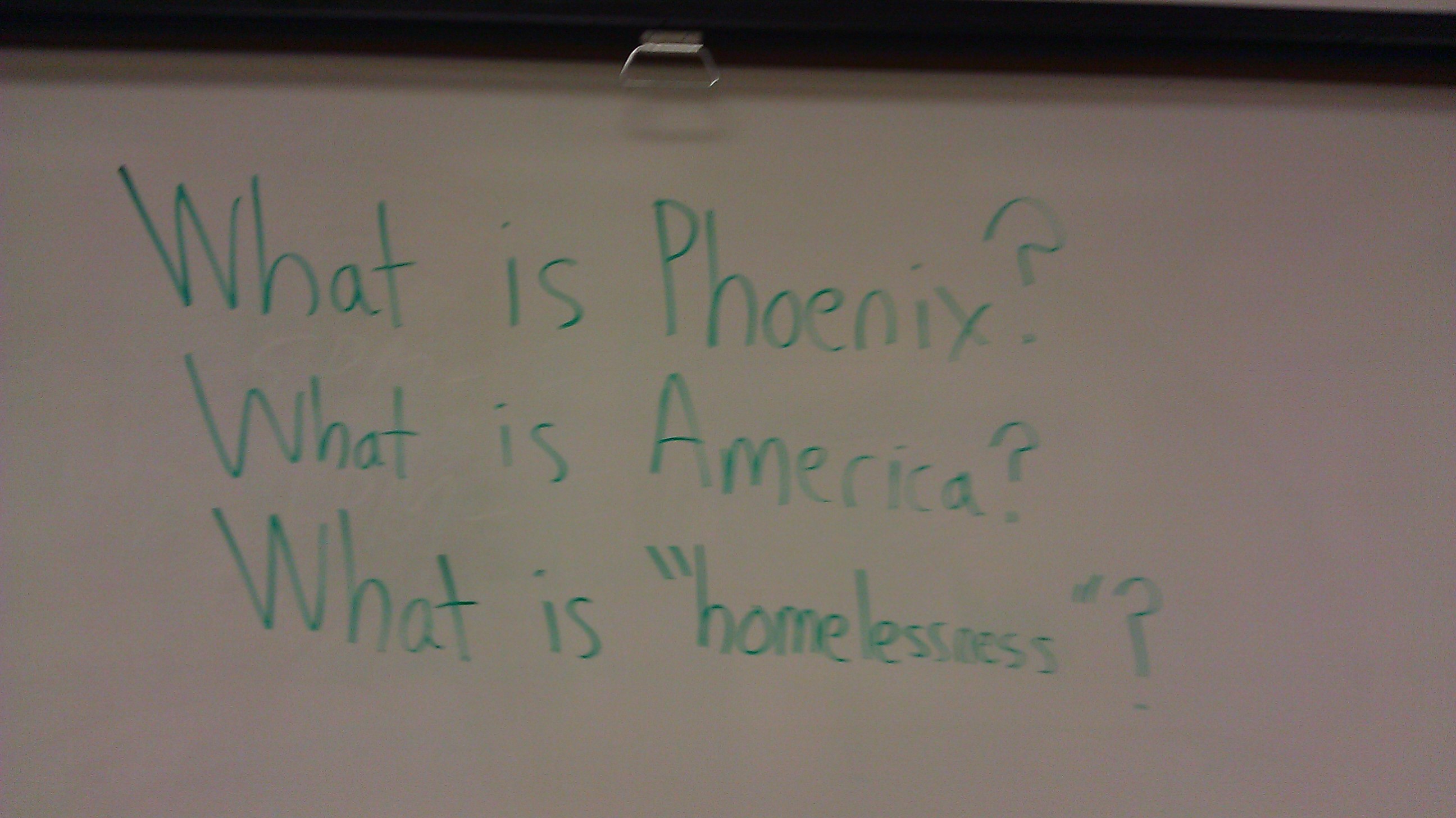 Downtown Phoenix is probably my favorite part of the city, and luckily I have excuses to travel there twice a week. Mondays, it’s our Humphrey seminar. Fridays, I trek downtown for a very different reason.

I teach a creative writing class at Lodestar Day Resource Center, and also volunteer in their library. A full-time worker at the center is writing a book on homelessness, which I am helping to edit as well.

Today’s was a class of three, a little smaller than average. As a warm-up, I asked them to “practice writing honestly” and answer three questions, however they chose: “What is Phoenix?” “What is America?” “What is ‘homelessness’?”

The answers were amazing and diverse. An angry spoken word piece about America. An understated and touching poem about homelessness. A straightforward nonfiction description of Phoenix, that accidentally became a shocking personal story about a car wreck she saw first entering the city.

“The idea of someone living in a tent in this country says little about the decisions made by those who dwell within and so much more about our nation’s inability to adequately respond to our fellow residents in need.”  -Neil Donovan, executive director, National Coalition for the Homeless

The more I volunteer at LDRC, the less difference I see between myself, whose life happens to be in a good place, and our clients, whose lives happen to be in a bad place. I’m not saying that all homeless people are victims of circumstance, and that none of them put themselves in the hole. But it’s easier to point at a beggar on the street and say, “You’re lower than me,” than to talk poetry with someone and say the same thing.

We have an abnormally large homeless population in this city (the treasurer of LDRC told me today that over 5,200 homeless get mail at the center, meaning that there are probably at least 8,000 homeless adults in the Valley at any time.) It’s also quite underserved, and many people I work with feel voiceless and ashamed.

Moments like these are when I wished there was some way to publish or legitimize these writers’ work. Some cities do have newspapers or magazines written by the homeless, and specifically covering the homeless. A good example is Portland’s Street Roots nonprofit newspaper.

My wish is to start something like this in Phoenix. Humphrey fellows: Your backgrounds may not be in publishing, or starting newspapers, or indeed in grassroots efforts at all. But you have experience in media. You know how to lead. You care about community. You have writing, organizational, and technical skills. You also have a community service requirement to fill for this seminar, haha, which is what I’m getting at right now. Maybe a few of you would be generous enough to help me explore options for creating a publication in Phoenix that’s written by, and for, its homeless population. It’s never been done before here, which is exactly why someone should try it.

I’ll end this blog post with a few facts about homelessness in America. I’d be interested to find out how they compare to the situation in your countries.

National Coalition for the Homeless

4 Comments on “Homeless in America”