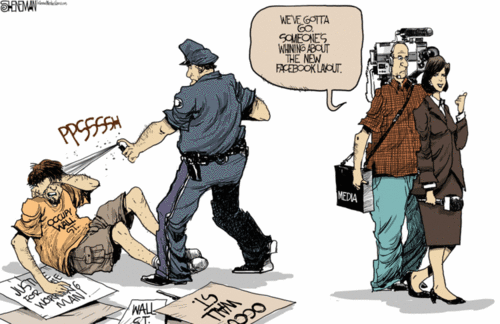 “Occupy Wall Street” and the other “Occupy” protest in various cities across the countries have been popular trending topics on Twitter and are discussed on other social networks like Tumblr and YouTube, but according to this cartoon, the traditional mainstream media is not covering it.

This grassroots demonstration is similar to the ones going on around the world, particularly in the Middle East and in Europe, and is against what the people feel is an unfair financial system.

According to the unofficial website, “Occupy Wall Street is leaderless resistance movement with people of many colors, genders and political persuasions. The one thing we all have in common is that We Are The 99% that will no longer tolerate the greed and corruption of the 1%.”

There’s been complaints of police brutality with pepper spray where the protests have been taking in Liberty Square. It’s been 2 weeks so far and vlogs, blog posts and tweets have been sent out to update the general public about what is going on and why the individuals are there.

On the unofficial Occupy Wall Street website, one of the blog posts said that they are now entering the media spotlight “not because of our political message, but because certain high-ranking members of the NYPD punched, threw, and stepped on peaceful marchers.”

Why do the protesters feel that the media is not sufficiently covering the Occupy Wall Streets and related demonstrations? When I Google searched “occupy wall street,” there were articles on each major newspaper in the country that came up.

Various celebrities have stopped by which will no doubt help garner some more attention, but not necessarily good attention according to the protestors who only want people to look at the message- “We Are Change.”

This is a video interview of people on the ground asking why they are at Occupy Wall Street demonstration: http://youtu.be/Sa54JF6Cz6U

There was an miscommunication and rumor that the band Radiohead would show up at Occupy Wall Street, but it turned out to be false, confusing the press and the public. Occupy Wall Street wrote, “Due to miscommunication within our rapidly expanding and adjusting group, we were unable to determine that this was a hoax in time; it can be difficult to seperate rumor from fact in an open source movement.”

It’s quite difficult to have a PR strategist then for a group that doesn’t have a leader. Everyone is a citizen journalist and PR practitioner for the group and the vision, mission, methods and accountability are being morphed by the community that shows up to these demonstrations.

View all posts by NAberra →