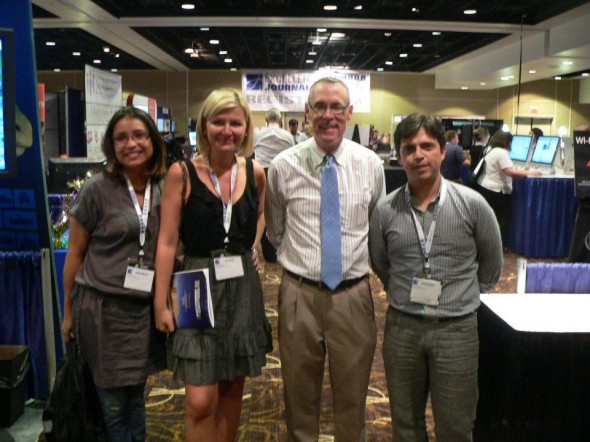 This week, me and 5 other Humphrey fellows attended Excellence in journalism 2011 conference in New Orleans, so I would like to share with you some of the highlights and useful links.

One of the biggest highlights was New Orleans itself, but I think I will write a separate blog about that one later 🙂

Conference began with the very inspiring session with CNN reporter Soledad O’Brien, who reports about minor communities, as she herself is a daughter of two immigrants. During the discussion she offered a lot of important advice for reporters.

Later I have attended very interesting session about  creating multiplatform stories with “Queen of Convergence,” Victoria Lim. She has shared her experience and advised how to make people “read us, watch us and surf us” at the same time, what kind of information is important for different type of media and how can we multitask while working on one story.

One of the most attended lectures was the one about “the new Facebook”. Vadim Lavrusik, Journalist Program Manager at Facebook introduced us to the new features such as “subscribe option” and “timeline”, which I’m sure you already all know about. He explained how can we use the new tools as journalists and if you would like to know more about it, you can check it here.

The session that I personally enjoyed the most was the one with the “google guy”. He was extremely funny and he showed us some useful tricks that we can do with Google. We all laughed when he presented the Insights for search option where you can search for “the most searched” word ( I promise I won’t use the word “search” in this sentence again) in any period of time and entered a word “hangover”. The results were surprising:)

The most moving part of the day came during the Paul White Award Ceremony where two outstanding female journalists received their awards. One of them was Lara Logan – an CBS News Chief Foreign Correspondent who was sexually assaulted while reporting in Egypt earlier this year. Second one was “broadcasting pioneer” Linda Ellerbee whose acceptance speech lasted for almost half an hour, but you really didn’t want it to stop. She has talked about her beginnings in the broadcasting, her very unique style (of fashion and also performance) and her bold way to through her professional and private life. It was one of the most inspiring speeches I have ever seen – humorous and funny, but on the other hand full of wisdom and experience. At the end, she (the survivor of breast cancer) said: “A good time to laugh is any time you can.” This speech brought all the people to long standing ovation and it was a great end of a great day. More about the New Orleans conference in the next blog…

2 Comments on “Excellence in journalism 2011”