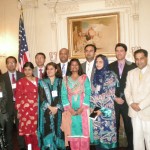 I met my 15 other Pakistani Humphrey Fellows in GLF on Last Sunday,as I couldn’t meet them in Pakistan due to not attending the pre departure orientation.I was not very much happy to see and meet them but rather impressed to witness their intellect and intelligence.It goes without saying that all of them deserve to be the recepient of this presitigious reward on the basis of their educational qualification and professional development.

The interesting part of my interaction with some of them who belong to Superior Services of Pakistan is worth mentioning.As these officers of Superior Services in my country don’t mingle with the people as a part of their job ,few of them who work with the Police held candid discussion with me about the role of media in Pakistan.I have some of my university classfellows and some university seniors and juniors working in Superior Services and I never follow any formality talking with them,as I am already acquainted with them.But talking with these Humphrey Fellows about role of media in Pakistan also propelled me to thinking that what kind of role media is playing in my country.

Most of their complaints from the media were about the exaggeration of some news and presenting some happenings in totally different and erroneous manner.They also expresed their reservations about the coverage of suicide blasts and bomb blasts in Pakistan,that if such kind of happenings dont occur so often in other parts of the world but even if an event happens in other countries which disturb law and order situation,then these countries dont project it in the manner as our media do in case of suicide attacks or bomb blasts.

I listened to their grienvaces and conveyed to them that how breaking news hold extreme importance in the media and the people also want to be updated as to whats happening in the country.It is also a caution to inform people to onfine to the safe places or their home in order to avoid further damage.But,I think they were absolutely right in terms of highlighting such kind of news which help shaping the negative image of Pakistan.The time has come when I think its the responsibilty of media to also highlight the positive aspects of Pakistan which are hardly known to the world,let alone to the Pakistanis themselves.

Pakistan is a land blessed with different natural resources,manpower,resilient nation and talented people,the humphrey fellows are one example of this talent.I also want to mention that every year hundereds of Pakistanis apply for Fullbright and Humphrey Fellowship,which makes Pakistan as one of the most competitive countries for these scholarships.Many of my friends in GLF asked me the reason as to why such big number of Pakistanis are selected for Humphrey Fellowship.I dont know the reason but what I know is that these fellows deserve to be so.

One Comment on “Pakistanis the biggest number in Humphrey Fellowship”