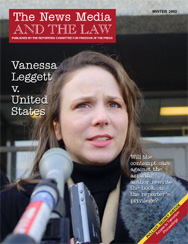 I am taking a media law class this semester and today’s class was all about reporter’s privilege. Here in the United States, there is this idea where there are certain circumstances where, despite what the government may want, a reporter does not have to give up a source. The law may vary a bit state to state, but there is even a federal law that states the only place where a reporter is required to testify is in a grand jury situation, which even then, is very dependent on the situation.

This idea made me wonder whether or not other countries have this same luxury. With how different government works in other countries, it would be insane to just assume that the whole world has this law. Moreover, since some countries even go as far as to regulate what can and cannot be reported on, I would imagine that if a reporter were to write a story of interest, the government was force the reporter to reveal sources.

If this is the case, then I would then be interested to know how cooperative reporters are with the government or if they are more loyal to their sources. Here in the United States, there have been many reporters that have gone to jail so as to not reveal their sources. However, it is possible that the punishment in other countries may be more severe.

This exchange I had with myself during class made me realize that although there are classes like mine throughout the United States that are constantly critiquing media law and how, at times, unfair it may seem, we as the media, still enjoy many freedoms and have protection that other areas of the world may not.