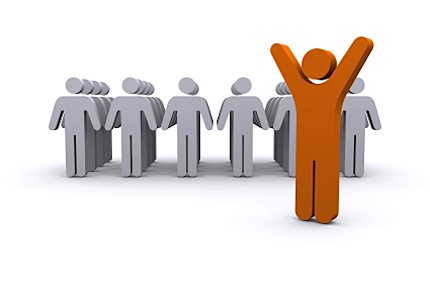 For my leadership book report, I read Tribes by Seth Godin.

My favorite quote in the book which sums up the basic point of what Godin is trying to say is this: “The secret of leadership is simple: Do what you believe in. Paint a picture of the future. Go there. People follow.”

Using case studies, bullet-point lists and encouraging stories of success, Godin argues that the world needs you to be a leader, but it’s up to you to decide to take that position.

Once a person chooses to take the lead, they need to assemble a loyal following or tribe. Tribes, according to Godin, are made of people with a shared interest and way to communicate.

The best example of modern day tribes would be on social media networks. Twitter fans, Facebook friends, blog readers, YouTube subscribers are all authentic, functioning tribes who are interested in a certain topic, love to talk about it and seek out news and information from key influential leaders. Whether it be about makeup, politics, technology or music, fans or followers are very important to the success and growth of an idea.

The movement doesn’t have to be big though. You don’t need 1 million YouTube subscribers to necessarily be a leader. Godin says it’s a big mistake to just think about having a big following. Instead, good leaders should focus on tightening their tribe.

Here are also five things leaders should do in order to start their own movement:

1) Publish a manifesto to share your mission with members,

2) Make it easy for followers to connect with you media

3) Make it easy for followers to connect with one another

4) Realize that money is not the point of a movement

5) Track your progress publicly so followers can contribute

With social media and new forms of communication, anyone can have their voice heard which makes it really easy to take the initiative and take chances.

Some helpful online tools I have found for leaders and change-makers include:

–Change.org, a site where anyone can start a petition, mobilize supporters and enact real change

–Mashable.com, for news and stories on marketing, media and more

–Ashoka, investing in solutions for the world’s toughest problems

View all posts by NAberra →