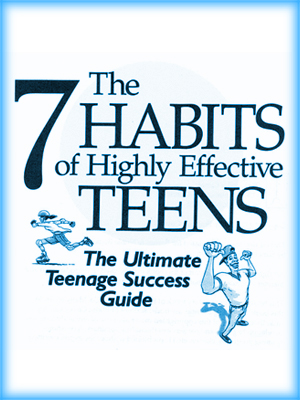 The original seven habits book deals with finding oneself through principles of a character ethic that are described as being universal and timeless. The 7 Habits puts forward an integrated and principle-centered approach to solve the myriad of personal and professional problems that people continually face.

In the book for teens, author Covey (1998, p.4) lays forth the reason for why he attempted to target teenagers:

I wrote it because life for teens is no longer a playground. It’s a jungle out there. And if I’ve done my job right, this book can be like a compass to help you navigate through it. In addition, unlike my dad’s book, which was written for old people (and can get boring at times), this book was written especially for teens and is always interesting.

What’s Effective About the Teen Book! 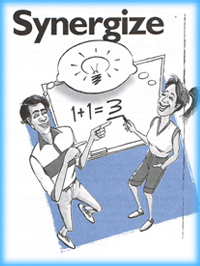 First of all, it is important to note that this book is not the typical tome of lines upon lines of text that bring about a sense of monochrome monotony.

The entire book is generously interspersed with funny and visually appealing illustrations, cartoons and diagrams explaining what is written. These go a long way in explaining the concepts.

For instance, the entire 7 habits are summarized in a drawing of a tree. The use of such imagery provides an easily digestible explanation of where each habit lies in, and what their relations are to one another.

Another strength is how the book provides encouragement towards starting practicing the 7 habits, in what is termed as baby steps. Covey (1998, p. 27) explains that “though small, these steps can become powerful tools in helping you achieve your larger goals”.

As the book is aimed at teens, naturally, the situations that are used to enhance a principle are based on what teens face in their lives.

It’s about how to proceed when a friend badmouths you, your parents’ seemingly overbearing nature, your teachers’ disregard of the importance of your social life by piling you up with homework, etc.

This approach makes everything very relatable to the typical teenager, and thus provides easy parallels from which the teen can work on when using the principles set forth.

All which has been said so far are excellent and targeted enhancements to the 7 habits, which form the crux of the book as it is. The book deals with the habits in a way that is stylized especially for teenagers.

This can be clearly seen in how each habit as was envisioned by Stephen Covey, was manipulated by his son Sean Covey, with a catchy phrase to strip the ostentatiousness from the phrases that title each of the 7 habits. 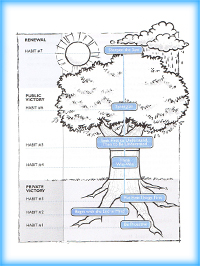 When coming to the seven habits, these are divided into three main categories. Habits 1, 2 and 3 form the private victory.

The habits under these deal with identifying yourself, figuring out what your goals in life are and then planning so that these happen.

As such the habits here are to Be Proactive (I Am the Force), Begin with the End in Mind (Control Your Own Destiny of Someone Else Will) and Put First Things First (Will and Won’t Power).

This was followed by the public victory, consisting of Habits 4, 5 and 6, which primarily deals with how to function with other people and in groups and making the most out of such social interactions.

These included the Habits Think Win-Win (Life Is an All-You-Can-Eat-Buffet), Seek First to Understand, Then to be Understood (You Have Two Years and One Mouth… Hel-lo!), and Synergize The “High” Way.

The final habit of was that of renewal, tagged with It’s “Me Time”.  It’s about sharpening the saw every once in a while so that you are kept refreshed of the principles you learn in the book.

Be Exposed Early On 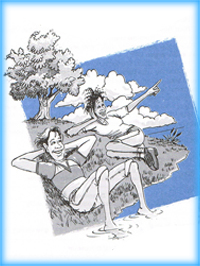 At no other time in ones life do challenges take on the magnitude they do but for the teen years.

This is because of the simple reason that situations, which crop up during adolescence are novel, and are then interpreted under the limited experience had so far, thus causing them to be wildly distorted out of proportion.

A pimple erupting on the face would be viewed as catastrophic during these years where one transitions to being an adult.

Which is why the book for teens is especially important.

It is a book that is easily palatable for people of that age group, and would equip them with the tools provided by practicing the highly useful 7 habits at that point in their life where they are easily impressionable.

Starting out early with an awareness of these principles would ultimately prove to be advantageous to them when they emerge into the adult world of more complex relationships, time management issues, figuring out what to do with life while being content by renewing oneself.

As teen years are the playground imitation of the adult world, it is at this time that the 7 habits should reach them, to allow adolescents to analyze the adult world mimicking situations they are faced with, and then work towards overcoming them.

This is the book’s greatest strength, it’s ability to make contact with an audience whose minds are not yet set on a certain set of paradigms or habits.

With the highly entertaining way in which the book is laid out, it is extremely easy to absorb and would prove to be invaluable because these timeless principles would reach them at an early age.

One Comment on “The 7 Habits of Highly Effective Teens”