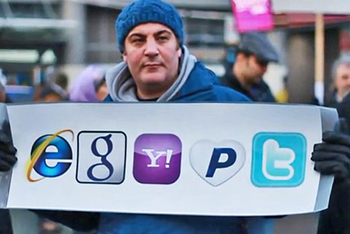 Taati and Mona both gave riveting presentations today about their home countries — Namibia and Egypt, respectively. I was amazed by how little I really knew about both of these countries. I learned more today than I would reasonably be able to fit into a blog post, so I want to narrow it down to two common themes I saw in both presentations: uprising against oppression and the use of social media.

I admit I don’t know much about the war in Namibia against South Africa, other than what I learned today. But the basic theme is similar to the recent uprising in Egypt: It was a fight for democracy, equality and freedom from oppression. That fight isn’t limited to Namibia and Egypt, of course — there are parallels to it in the Arab Spring and even the American Revolution. I think we all have a basic human desire to be treated with dignity and respect — a desire that transcends cultural boundaries. It’s interesting to see how that plays out in different countries.

One difference I noticed between the two struggles for freedom was Egypt’s widespread use of social media, both leading up to the revolution and during it. Of course, this has a lot to do with the time period — Namibia’s freedom fight occurred between 1966 and 1988, before social media took root. But it’s incredible to me how much of a role social media played in spreading the revolution in Egypt. Egyptian activists used social media to issue a call to arms to their countrymen to rise up against Hosni Mubarak, and what’s more, it worked. I think here in the U.S., we often underestimate the power of tools like Twitter and Facebook. We tinker around with them, but people on the other side of the world used these websites as a way to unite and rise up to defeat an autocratic ruler in a matter of days. Although the situation in Namibia was different, I wonder what would have happened if social media had been around during the war in Namibia. Would it still have lasted 22 years?

Namibia is on a path to reconciliation and increased stability, but that doesn’t mean social media has no place in the country. Taati talked about Vision 2030, the government’s quest to improve the quality of life of Namibians to the level of their counterparts in developing countries. I feel like social media could help bolster this in so many ways. It could help small businesses network and grow. It could empower women — only recently allowed to play a major role in the workforce — to start up their own businesses and be able to prosper. Whether it’s being used to promote a cause or as a professional tool, social media has an incredible potential for influence that I think a lot of us tend to take for granted when we use it on a daily basis.

One Comment on “Revolution and social media in Africa”