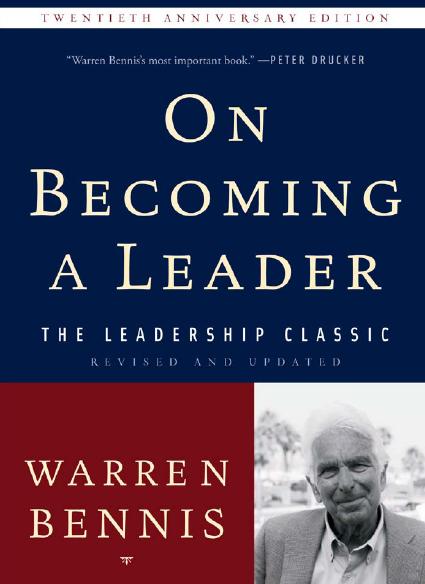 The leadership book I read for this class was On Becoming a Leader by Warren Bennis. A friend recommended it to me, and my honest first impression of the book was that it was going to be another cliched, dry 12-step program on how to “be a better leader.” But as I read it, I was more and more pleasantly surprised at the things I was learning.

Bennis writes with a refreshing simplicity. His book isn’t a 12-step program but rather a 10-part guide that emphasizes qualities of a leader. It’s not meant as a magical self-help program that will instantly turn you into a leader after you finish reading it; Bennis himself even says, “Leadership courses can only teach skills. They can’t teach character or vision — and indeed, they don’t even try. Developing character and vision is the way leaders invent themselves.”

There were a lot of take-aways from this book — even nuanced ones within the 10 sections. If I were to go through all of them, this post would be ridiculously long, so instead I want to focus on the two that stood out to me the most: master the context and know yourself.

The biggest point Bennis stresses about mastering the context is the difference between a manager and a leader. “[T]oo many CEOs become bosses, not leaders,” he says, “and it is the bosses who have gotten America into its current fix.”

Here are some of the key differences:

This got me thinking about my own leadership style. When I’m put in charge of people, do I work with them or do I try to control them? I’m guilty of being a “manager” a lot of the time, and this book inspired me to do better at focusing on leading others rather than being a boss over them.

Even though building relationships is an important factor of leadership, you alone are responsible for your own self-direction, Bennis says. No man is an island, and a good leader knows the difference between self-knowledge and total self-reliance. Trust yourself above all else, but never shut others out. Bennis sums it up well by saying: “Leaders learn from others, but they are not made by others.”

There are two ends of the spectrum: Some people are totally self-reliant and isolate themselves, and others are wholly reliant on others and can’t function on their own. There needs to be a balance, Bennis says. This is another key thing that’s easy for me to understand but hard for me to remember. I tend to be on the self-reliant end of the spectrum — I’m not great at taking others’ advice because I think I’ve got it all figured out. But any decisions I make on my own — especially in a leadership role — will affect others, and I need to be mindful that my place in the world isn’t limited to just me. As a leader, I need to be in tune with the people I’m leading, and I need to learn from them while still maintaining my role as a leader and being responsible for my choices.

Overall, I thought On Becoming a Leader was a great book. For anyone who wants a fairly easy read with a lot of good lessons and memorable quotes, I would highly recommend it.