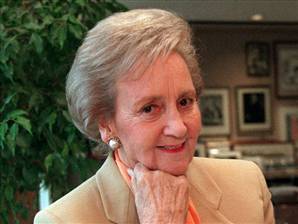 I’m working on my leadership paper for the second week now, and I’ve been writing about female journalists whose leadership styles inspire me. Last week, I talked about Nellie Bly; this week, I want to focus on the incredible leadership qualities of Katharine Graham.

Known by many as Katharine the Great, Graham did not aspire to a leadership role but rather was thrust into one. In 1963, her husband, Philip, committed suicide. Philip had been the publisher of the Washington Post, and soon after his death, Katharine Graham succeeded him.

During her tenure, which lasted until 1991, Graham made what were potentially some of the toughest decisions a publisher has ever had to make – and her decisions led to two of the greatest moments in American journalism. One was her approval of the Post’s publication in 1971 of the Pentagon Papers, which ended in a victory for journalism even though it put the company’s stock in jeopardy. The other was her decision to break the Watergate story in 1972 – she pressed forward despite threats from the White House, and the uncovered scandal toppled Richard Nixon’s presidency two years later.

Graham was a humble yet firm leader. Her dedication to journalistic standards led her to make risky decisions – and it made the Post into a renowned and respected newspaper. Graham used her power wisely. In a 1973 interview with W, she said, “I don’t flinch at (power) the way I used to. If power is there to be used, it is used whether you abdicate it or whether you use it. You have to remember that you can do as much damage by abdicating it as by using it in the wisest way you know.”

One leadership quality I have often struggled with is understanding the balance between humility and firmness. Too often, I fail to speak up about things that bother me. I have let things slide for fear of offending someone. But leadership as a journalist isn’t about letting things slide; it’s about taking risks when you know you’re doing the right thing for the publication in the long run. Katharine Graham understood this, and it was what made the Post so successful under her leadership. Her calm strength inspires me to lead with a firmer hand while maintaining compassion and understanding toward others.