For my class Philosophy of Art I supposed to write about some Art that makes me feel different and why… I choose symbols from Stecci- Bosnian medieval tombstones.. They are catching my attention for already couple of years and they are still kind of mystery for all of us…

The Stećci are monumental medieval tombstones that lie scattered across Bosnia and Herzegovina, and the border parts of Croatia, Montenegro and Serbia, although almost exclusively following the borders of medieval Bosnian state. Appearing in the 11th century, the Stećci reached their peak in the 14th and 15th century, before disappearing during the Ottoman occupation. Stećci – tombstones belonging to the medieval Kingdom of Bosnia and the Bosnian Church , Bosnian heretics, who was part of the European rebellion against the Vatican.

Their most remarkable feature is their decorative motifs, many of which remain enigmatic to this day. Spirals, arcades, rosettes, vine leaves and grapes, suns and crescent moons are among the images that appear.

All of those facts actually make me consider this piece of Art as something, which attracts me, and make me appreciate it and feel certain admiration.

Art has no judgment and is never wrong. And can communicate in many levels with observer.  This particular tombstone Stecak from that period is actually for me, very robust piece of Art witch communicate with us in many levels. First of all it is representing unknown history of medieval period, which makes this piece of Art mysterious, also it have symbols created in harmonious way. The best way to learn the secrets of the symbols is to follow the recommendations of Antic Greeks, “Know and meet yourself ” – which is equivalent to learn the secret behind one of the greatest symbols: human beings, symbols of the immortal soul and symbol of the universe.

This tombstones are still alive, interesting and intriguing expression in the life of art of my country.  After all its features, the tombstones do not belong to the European Renaissance art, as both stylistically and conceptually they are alien to the spirit of the Renaissance – and are fully Bosnian medieval monuments. Unique and original in the world.  My personal observation leads me to the fact that what I found attractive for me in this piece of Art, beside its visual representation, is obviously some personal, subjective, patriotically maybe emotions, but also mysterious history which make them even more beautiful from my perspective. 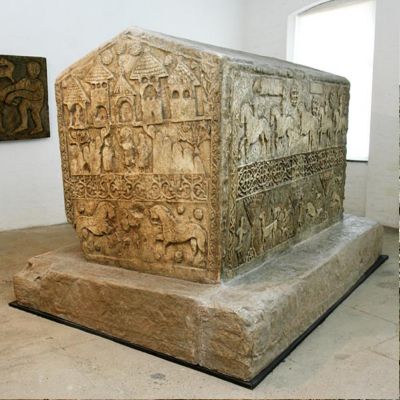