As a huge sports fan and avid basketball player, I grew up learning the importance of teamwork. The value of teamwork in sports serves as an example of how effective teamwork can be in any area of life. Any young athlete grows up hearing “There is no ‘I’ in ‘team'” from their coaches and are taught to put the team before yourself. In a way, being a part of a true team is nothing short of everyone being a servant leader. Everyone leads in different ways, as Likert showed us last week. Some are authoritative leaders and take a more vocal role, while others simply do their part and allow others to lead the way. But each person serves as an essential part of the equation that either results in a successful and balanced team or an unhappy and unbalanced experience.

As an example of both type of team, let’s take a look at the Olympic basketball debate that Kobe Bryant started when he said the 2012 American team could beat the famous 1992 Dream Team over the summer. No matter your opinion on which team would win (I must state my own opinion that the Dream Team would win hands down, just for the record), it is undeniable after watching the summer Olympics that these two teams have very little in common. Whereas the Dream Team dominated the competition with good, unselfish basketball, the 2012 Team USA seemed more like a group of individuals. The Dream Team worked together and had balanced scoring to help them blow their opponents out; the 2012 squad had a few players who scored a lot while the others kind of trailed off. The Dream Team was made up of a remarkable group of NBA legends and Hall of Famers, but these superstars put aside their pride and egos as servant leaders, each playing their own part and doing their own respective jobs to contribute to the overall team effort. This year’s basketball team faced stiffer competition, but they were never really cohesive. Kobe Bryant, LeBron James and Kevin Durant led the way for Team USA and they all certainly got along, but the reason the Dream Team swept the world off its feet is because they were a tight, talented unit. This year’s stars never really learned how to play well together, while the Dream Team’s superstars/leaders of Michael Jordan, Charles Barkley, Larry Bird and Magic Johnson came together and learned how to cooperate in the group. The Dream Team also had an inside post presence with David Robinson and Karl Malone. This may seem like more irrelevant basketball talk, but if the Dream Team is the metaphor for the perfect team, these players functioned as servant leaders who didn’t get as much of the spotlight, but still had an essential role on the team and fulfilled their duties perfectly.

This debate is just one of many examples in the world of sports that can be applied to every other facet of life when it comes to teamwork and leadership. The Dream Team had leaders, but was still an effective team because they all fulfilled their roles for the good of the team. The 2012 American team was still successful, had leaders and won the gold medal, but they had a much harder time and were exposed at times by countries with more team chemistry like Spain and Lithuania. They lacked an inside presence and had a lot of guys who scored points, but didn’t really contribute like the role players of the Dream Team. So if you’re looking for a reason to take the Dream Team’s side in this debate, the fact that they were a much more cohesive team as opposed to a talented group should be where you start. 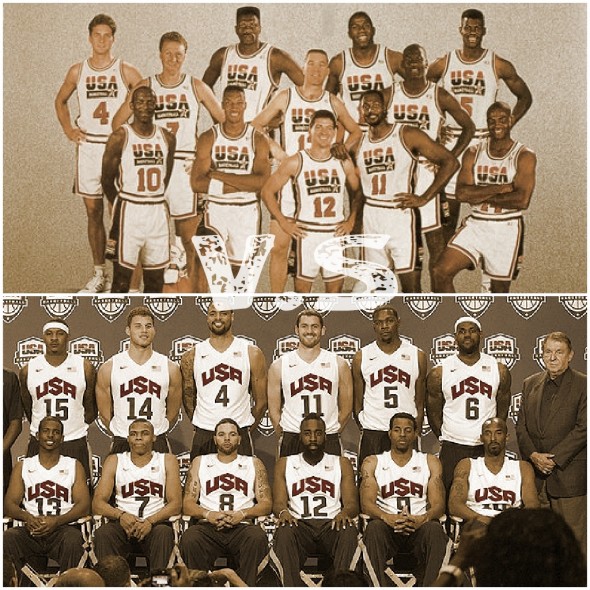