As a non-partisan voter, I came into the first presidential debate tonight with an open mind to take note of what leadership qualities each candidate brought to the table. But after watching the entire debate and following it on Twitter, it was hard to find a large amount of leadership qualities in our current president Barack Obama in comparison with Mitt Romney. Although I’ll confess I’m not up to speed with every single issue discussed in the debate and BOTH candidates probably were in need of fact checks, my opinion sided with the general consensus that could be found on Twitter or Facebook: Romney took round one of the debates.

While Obama seemed uncomfortable, condescending and often bored during the debate, Romney spoke with enthusiasm and speed. He furiously scribbled down notes while Obama was talking and responded well. Many pointed out his creepy and almost condescending smile while Obama was talking, but the fact that this was made into such a big deal just points out how truly boring Obama’s speeches were: he meandered off topic, he went off on tangents and he spoke so slowly that the pace of the debate slowed to a standstill every time it was his turn. Obama spoke for four more minutes than Romney did, but Romney probably said a lot more with his time. Despite the creepy smile, Romney seemed attentive whenever Obama spoke while the president looks angry and frustrated when it was Romney’s turn. Romney looked at Obama for the majority of the debate, which many people (mostly pro-Obama people, I noticed) pointed out, saying that Obama was addressing the nation as opposed to Romney addressing one man. However, I think that since these are debates, Romney challenging Obama like that was a smart decision because it rattled him, it allowed Romney to go on the offensive and because Obama ended up looking like he didn’t want to engage Romney.

I noticed both leaders used their hands a lot when they spoke and they often clasped them in front of their bodies, two signs of authoritative leaders. Both were respectful to their opponents, although a little more courtesy should have been thrown to poor Jim Lehrer. The biggest difference between the two in tonight’s debate was attitude and passion. Romney spoke quickly and had an urgent tone to his voice while Obama stuttered and stumbled through most of his responses. Romney looked excited and passionate about the issues while Obama talked about figures and facts like a schoolteacher trying to educate an annoying student. He even treated Lehrer that way when he told him “I had five seconds before you interrupted me.” This little quip came off as funny, but there definitely was a hint of frustration behind it.

For the majority of people on Twitter, it seemed that what was being said wasn’t nearly as important as how it was being delivered and in that category, Romney dominated with enthusiasm and a few surprising instances of humor. It may have been because the president was rusty, but Romney seemed to be in peak debate form with crisp and clean responses as opposed to Obama’s long and drawn-out speeches. In basketball or football, if you’re going up against a high-scoring powerhouse, you want to dominate the time of possession and slow down the pace if you want to win, but unfortunately for Obama, that’s not the way to go in a presidential debate. Keep in mind, this is all coming from an independent, which is the big category of people that candidates are trying to win over with these debates. A leader should be enthusiastic and inspire through their passion. Tonight, Obama didn’t even come close to doing that. He provided facts and figures, sure, but their delivery didn’t motivate me to get up off the couch and vote for the president to be reelected. So despite Romney’s “creepy smirk” and the possibility of Big Bird being canned, round one goes to Mittens. 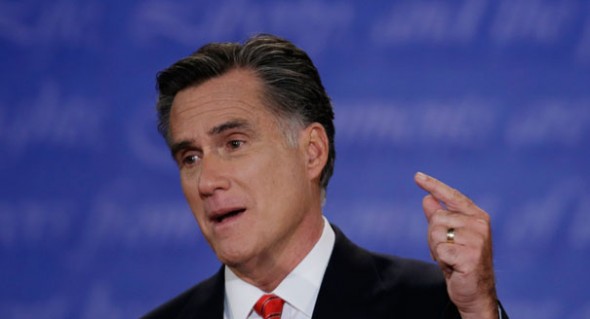