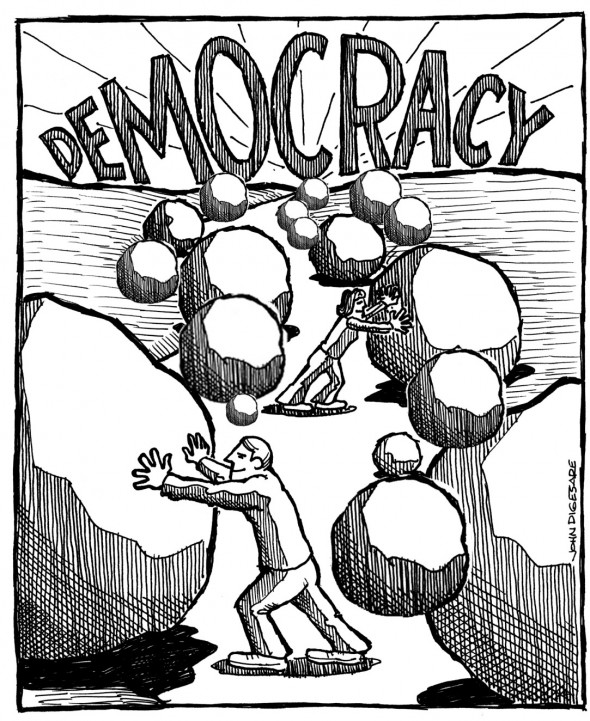 We, the Pakistanis are a so- called free nation for last sixty five years and constitutionally a democratic state with a strong history of military’s interventions. It would be the very first time in the political history when a democratic government will complete its five- year tenure in 2013. Well, it is really hard to me to understand the actual meaning of democracy if I look at this term in context of political history of my country. I always knew that democracy means government of the people, by the people and for the people but when I try to apply this definition to Pakistan, I feel that it does not fit in there. In Elections 2008, I casted vote for the first time in my life. Before that, I was not interested in politics, nor was politically enlightened. The dark shadow of dictatorship lasted for ten years this time and we were looking for a ray of hope to be ruled by the government of people. Since I had no political affiliation therefore I voted for two main stream political parties, one for the provincial and the other for the federal candidate. I just wanted to vote to add my part for a political change. What changed by the way? Was it all about not being ruled by a military dictator? It’s been almost five years and I could not see a government of, by, or for the people so far. In fact, we were better fifteen years ago perhaps.

In my view Pakistan has never observed any free and fair elections. Main political parties have their descendants’ ready to take over and they can do anything to keep their constituency intact. I also covered general elections in 2008 as a reporter and what I experienced made me repent my decision of voting. Elections were badly rigged by almost all the political parties, people were brought there to vote forcefully, most of the women were compelled to vote for the candidates being supported by their spouses, fathers or brothers. I have also seen these elected members sitting in the parliament and thrashing out plans to undermine rival parties and vice versa instead of thinking of the public who elected them to represent them in the honorable house. I have seen them spending public money on their lavish breakfasts and lunches before the parliament session proceedings. This made me feel sick and forced me to ask a question to myself that why I voted for them?  Is this known as democracy? The government we elected instead of using and generating own resources always looks towards other developed countries for financial aid to fulfill basic needs of the 180 million people dwelling in the land. We are under billion dollars debt. According to the Human development index, 60.3% of Pakistan’s population lives on under $2 a day and some 22.6% live under $1 a day with approximately seven family members depending on one bread earner. Where this aid is going by the way? I wish the countries giving aid to Pakistan could think of some check and balance.

On the other hand purity of democracy in Pakistan and empowerment of the elected representative are also questionable as the parliament and elected rulers work under direction of uniformed establishment on various issues like foreign policy and defense. For foreign policy diplomats are spoon fed by the establishment especially about the Kashmir issue. And it’s really a strange thing that the biggest chunk of the annual budget goes to defense. Still, elected representatives are not allowed to visit Pakistan’s atomic energy base in Kahuta. Even, Benazir Bhutto Pakistan’s strongest woman, two times elected prime minister of the country was never given permission to visit the nuclear installations of Pakistan. What further disturbs me is the fact that Pakistani Society is almost being hijacked by clerics, who don’t get vote by the people. They can do anything in the society but nobody is ready to put check on them. When, I see people killing other Pakistanis in the name of religion and watch clergy backing the killers, I ask myself; where is democracy?

When I was observing the US presidential elections in 2008 while sitting in the newsroom of my office, I had never thought that I would actually be in USA to observe the presidential election of 2012. I watched the first presidential debate while sitting with lots of students of Arizona State University. We all were tweeting about it and then discussed the meat of the debate as well. Being the president of United States for four years Obama was not looking or sounding firm about what he was saying. He was lacking the convincing spirit while arguing regarding economy, deficit, health reforms and taxes on the other hand republican candidate Mitt Romney was on the contrary. The new generation sitting in the hall of ASU was at some point disappointed but on the other hand they also knew that this debate would help them make a discussion for the future of America.

It’s been almost four months by now that I’m in the USA. Since it’s the election year, I see people expressing their political views daily at various places. What I have observed so far is that United States of America is experiencing a true color of democracy but when I talked to the students of Political Science they looked dissatisfied over the state of affairs. They say that institutional corruption is at its peak but still think that the color of democracy has not faded out in the politics as compared to other democratic states. Presidential Elections, to me, is like a grand festival that sets future’s political direction of the US. Candidates do try tactics to embrace triumph but their fate will be decided by the people. I have heard American president Barak Obama and his contestant Mitt Romney talking about the future of American people being irrespective of their color or race. What fascinates me is that religion is not involved in American politics, and I never heard the word ‘minority’ here in common discussions. Instead they have replaced ‘minority’ with the word ‘community’. Last Wednesday, it was another eye opening experience for me when I saw students of ASU sitting in a big hall to listen to the first debate of presidential candidates on TV. They all got together there as if they were attending some religious ritual. I had never seen such practice back in my country. Our teachers and even parents try to keep us aside from the politics or try to impose their own political opinion due to which youth does not has its own political opinion.

What surprises me about the US policies towards other democracies and dictatorships.  I have observed the long partnerships between US-Pakistan during Gen Zia and Musharraf’s regime. I believe that democracy in Pakistan can be strengthened if military interventions are not supported by the US and allies and role of the establishment and clergy is reduced through peoples’ power.

View all posts by fatimaali9 →