When most people think of a leader, they think of a politician, a social reformer or a war hero. But sports figures display many of the same leadership qualities found in more serious types of leader. While it’s true these superstars are simply playing a game, for many sports fans, the game of basketball is more than just a game, which helps explain why Michael Jordan was seen as a global icon during the 90’s.

Jordan was a leader in three main ways. As a player, Jordan was an unprecedented basketball player and talented athlete who racked up numerous individual accomplishments. As a champion, Jordan elevated the play of his teammates and made his team so incredible successful, winning six championships in such a short span (eight years, with Jordan playing baseball for one and a half of those eight). And as a global icon, Jordan captivated the world with incredible talent, competitiveness, hard work and charisma.

On an individual level, the player Michael Jordan was easily the best player on the Chicago Bulls of the 90’s. His numerous awards and accolades easily attest to that. In his time in the league, MJ won 5 MVP Awards, 2 Olympic gold medals, 10 scoring titles, a Defensive Player of the Year Award, 14 All-Star appearances, 2 Slam Dunk Contests and the Rookie of the Year Award. His points per game during the regular season (30.1) and during the playoffs (33.5) are still all-time highs for the NBA. On an individual level, it’s easy to see why such a dynamic scorer and incredible athlete made him a leader. His dunks and gamewinning shots made him a living highlight reel and the representation of the NBA.

On a team level, Jordan’s immense success also made him a living legend and a remarkable example of what a leader brings to his team. Jordan elevated his game when his team needed him most and became known for clutch performances at the end of close games. One example is “The Flu Game,” which is regarded as one of the greatest performances of all time in sports history. Waking up fit for a hospital bed, Jordan not only played in Game 5 of the 1998 NBA Finals, but he led his team to victory with 38 points and 11 assists. And in Game 6, he dropped 45 points, including the gamewinning shot that would be his last in a Bulls jersey. The picture, shown below, is immortalized as one of the best clutch shots in basketball history, an iconic last act of basketball’s greatest player. Jordan made his teammates better with time and brought six NBA titles to a Chicago Bulls franchise that had never won a single championship before. And in all six championships, Michael Jordan was voted the Finals MVP, which is a true testament to his status as the leader of the team. 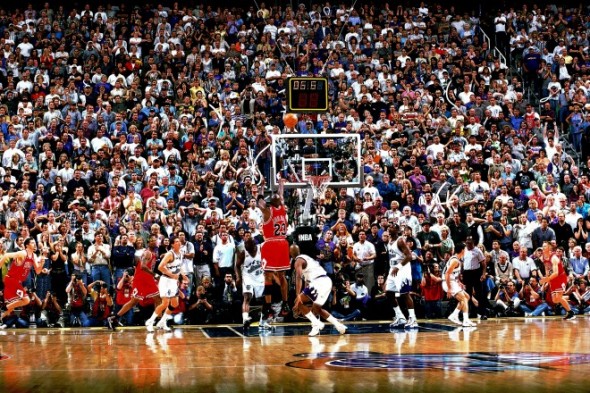 On a global level, Jordan took the world by storm in the 90’s. As David Halberstam writes, “His only rival globally was Princess Diana.” Jordan was everywhere: advertisements, commercials, cereal boxes. As a representative of Nike, McDonalds, Wheaties and more, Jordan was an extremely profitable marketing tool. Jordan became worth millions, not only because of his (comparatively) cheap contract, but through all his endorsements. But it wasn’t only about money with Michael Jordan. His charm, charisma and easy-going, down-to-earth personality made him an easy sell and he was one of the most popular Americans on the planet. The more Jordan achieved, the more people expected of him. The more people expected of him, the more he excelled. And the more he excelled, the more people began to believe that “man could truly fly.” Jordan wasn’t just an inspiration for basketball fans; anyone who watched him in the 90’s saw the incredible product that talent, hard work and desire could achieve. Michael Jordan transcended sports like only Babe Ruth and Muhammad Ali had done before him, which is just one more way he was a leader and pioneer in the world of sports and hard work in general.

Most people will see this as a sports fan’s gushing and roll their eyes at the thought of an overpaid athlete being anything more than a superficial leader, but this is not the case with Michael Jordan. Any basketball fan who watched Michael Jordan play in the 90’s will tell you that this man transcended sports and made basketball more popular worldwide. It’s sad that most people see Michael Jordan as a failed owner of an NBA team and an ass with little tolerance of the media now,  because he wasn’t always this way. If anything, everyone demanding so much of him constantly made him a grumpier person than anything else. Plus, Jordan’s contributions to charities and those in need shouldn’t be disregarded. In fact, when Jordan made his second comeback that damaged his career statistics, he donated all of the money made from that basketball contract to the victims of Hurricane Katrina. Regardless of his difficulties as an owner, Jordan should be remembered for singlehandedly globalizing basketball and for making children and adults alike believe in the impossible, which MJ delivered on a nightly basis. It’s hard to describe his relevance the the phenomenon that he was during the 90’s if you were too young to remember or care, but Jordan’s charisma as a basketball leader made him an undeniable leader that the NBA may never see the likes of again.

And for anyone who thinks LeBron may someday replace Jordan, go ahead and watch this for some perspective. The music’s a little dramatic, but you get the point. 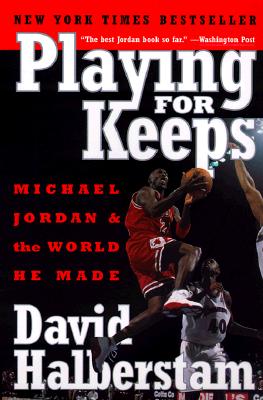