In business, leadership and life, one thing stands out among all of those who consider themselves happy, successful and fulfilled: their ability to deal with change. Change is a natural occurrence in all kinds of progress. Think about it – nothing would ever move forward if it weren’t for change! Nothing would ever move backward, either, and that’s how some of the most fearful people may view change, as a negative force that only wants to drag them down rather than live in an uncertain state.

The little book “Who Moved My Cheese?” has characters that emulate all the above stages. Which one do you identify with?

The mice, Sniff and Scurry: Living in a maze filled with cheese, the mice are in their glory. But with a supply of cheese that’s constantly going down in some areas, the mice are always ready to “sniff” out the change and “scurry” to new, cheese-filled areas. They keep their running shoes tied around their necks in case of a sudden need to go back out into the maze and seek new cheese. They are able to quickly begin enjoying new cheese rather than dwelling on the disappearing old cheese.

Hem: Hem, a littleperson living in the maze with the mice, is angry when the cheese disappears. He doesn’t think it’s fair, complains about the injustice of having no cheese and was caught off-guard by change. He is fearful of going out in the maze and, rather than exploring for new cheese, would rather stay-put in the very unlikely chance that the old cheese returns.

Haw: Haw, Hem’s friend, is also a littleperson living in the maze. Like his friend, he is upset and caught off-guard when the cheese disappears. However, he isn’t content to stay where there is no cheese. He eventually starts realizing that what he’s really afraid of is change and he’ll never has the chance to be happy if doesn’t go out in the maze to find new cheese. He eventually discovers new cheese and writes life lessons on the maze wall in hopes of helping Hem to gain confidence.

Which of the above characters do you identify with? And when change happens, what will you do to “move with the cheese?” 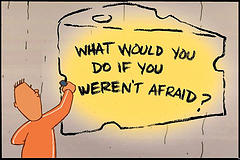