Here is the first in a series of catch-up blogs that cover what I was supposed to write about (my book and my leadership paper) and some other topics I had thought of blogging about, but neglected to sit down and write! 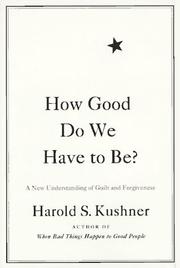 First, I will discuss the main points of my leadership book, How Good Do We Have to Be? by Harold Kushner. I think this summary will almost be more effective several weeks after I presented my book, because it challenges me to summarize Kushner’s main points without them fresh in my mind. Kushner argues that people are under constant pressure to be perfect in modern society, constantly comparing themselves with others and competing for love. These actions lead human beings to live lonely, impossibly depressing lives.

Kushner starts with the story of Adam and Eve and uses as it an allegory of man’s struggle for excellence against the forces of his very own humanity. Adam and Eve partook in the Tree of Knowledge and are forever evicted from the Garden of Eden, but in this paradise lost, they experience what it means to be truly human. They think. They love. They suffer. Animals in the garden are not conscious of death or love or sin. They simply follow a network of instincts and Darwinian schemas, breathing, mating and eating. Humans are more than that.

And that’s why we should not be distraught when we occasionally stray from the path of righteousness (or turning in every assignment on time). We were not meant to overcome every obstacle or achieve every accomplishment. Our relationships with parents, siblings and significant others must not function from expectations of perfection, but acknowledgements of flaws. But from those unrealistic ideas form the majority of conflicts, Kushner argues.

What I learned from Kushner’s book applies to leadership because a leader should not, in fact, be seen as a leader. A leader should be someone who conducts his or her tasks with transparency and dignity. As a leader, I do not need to be the only one in charge. I must simply be the person who overlooks the project as a whole and delegates where help is needed. And, as Kushner says, I should acknowledge my flaws and mistakes with as much confidence as I flaunt my talents.