By Miguel Otárola and Marta Cerava

“I have some (or even few) stories to share about race in U.S. media,”  he said when we met.  She said she has none or “not yet one” to share them with.

When we presented ourselves – he gave an identification – Hispanic from Chile; she said – she is from Latvia and no other identification seemed relevant to add. We are both media consumers and producers, as well as neighbors of different races and we sat down to share.

“I want you to surprise me with some race stories that you have found meaningful,”  she told him and thought that her “no race experience” reaction could turn into a highlight of this post.

And he did. He gave her four stories to read and said that they were “distinct race issues from this year” and that there were “PLENTY to choose from”:

But she was wrong.

The stories surprised her but the highlight of our conversation and meeting was actually him – a young journalist with his own experience on race in the media world. We believe that gives some unique insight.

“When it comes to my own journalism work, I’ve always felt that being Hispanic is nothing but advantageous. I’ve gotten to write stories in both English and Spanish (not often, but something I’d like to do more of), and other times they’ve sent me to the border because I knew how to speak Spanish. I’ve translated for class assignments and gone to primarily Hispanic areas in Phoenix to break news. So besides people not knowing how to spell my name every once in a while (which happens to a lot of people), I’ve felt very comfortable being Hispanic and reporting in Arizona,”  he told her.

She couldn’t understand why would he be unique with his Spanish knowledge in Arizona media environment.

“Well, I think you find that there are not that many Hispanic people doing reporting in the first place,” he said. “Not just that, Hispanic reporters that want to be successful in both English and Spanish are often pigeon-holed into only working on particular types of stories, so I’m trying to stand out with other types of stories.” 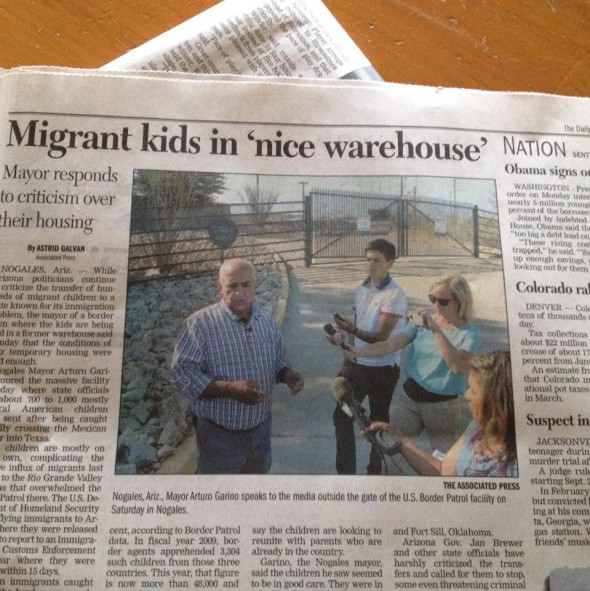 Few times during the conversation he tried to justify his comfortability with his Hispanic identity.

“I realize that may not be the case in other parts of the country. After all, what we see with a lot of media coverage in the U.S. is that race is only associated with problems: Police shootings, ill-conceived messages on immigration, mass murders. While I believe diversity should be an asset, it’s clear there are certain people that feel threatened about those who are different from them,” he kept explaining her.

She thought he is lucky and in comparison mentioned similar advantages to the journalists in Latvia who are bilingual or able to speak/write/produce media content in both Latvian and Russian (as the Russian is widely spoken and used by media in Latvia, but not so widely taught anymore).

“So do you want to develop professionally in Spanish or English media environments?” she asked. But he had no answer yet. She had observed similar doubts back home. If a person is talented enough to be able to work in both languages, then one has to choose between the audience size, elite or mass media organizations and your “own” people you want to deliver content to (if your identity(ies) allows you to distinguish).

“I don’t want for people to just define me by my race, even though I still bring it up when I can. The issue is not that I shouldn’t feel proud of my natural-born differences, rather that it’s not what I want to define me.

When I go to work after graduation, I hope that editors don’t try to just give me a bunch of Hispanic issues stories. It’s not what I’m the most interested in writing (at least right now),” he explains and wonders loudly that

“It almost works as a reverse discrimination, no?”

That can happen, of course. Unless you prove that you have other skills or interests that you value more, it’s something that the journalist may have to deal with. This can be seen as a negative, especially if we want to move beyond from defining ourselves by *just* the color of our skin.