From the 25 to the 29, the October Global Leadership Forum (GLF) took place in Washington, D.C. Its agenda was global climate change. Within five days, 166 Humphrey Fellows from 90 countries discussed what it means to be an effective leader in the 21st century, how to become a leader and how the leaders of different countries can come together to stop global climate change on our planet. The program of the forum was very rich and diverse and I’d like to make a survey of four main parts of this event: team building, presentation of teamwork «Not a boiling Frog», acquaintance with Washington and meeting with professionals of the media market. 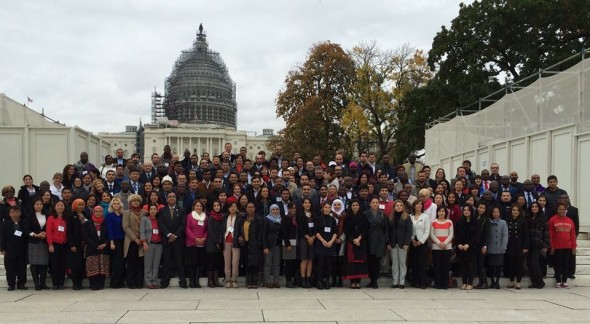 The program of the forum was aimed that all participants know each other in a short time and were able together to discuss the global challenges of climate change on our planet. After check-in and  Program managers official welcoming, an interesting team building began. Director of Skill Focus Consultancy and alumni of Humphrey Program Shanta Nagendram from Malaysia, briefly spoke about the fact that all professionals who have gathered here need a new knowledge. She compared all fellows with glasses full of water, and said in order to fill a glass of fresh water we need to empty a glass and be fully involved in the new life and start exploring new horizons. 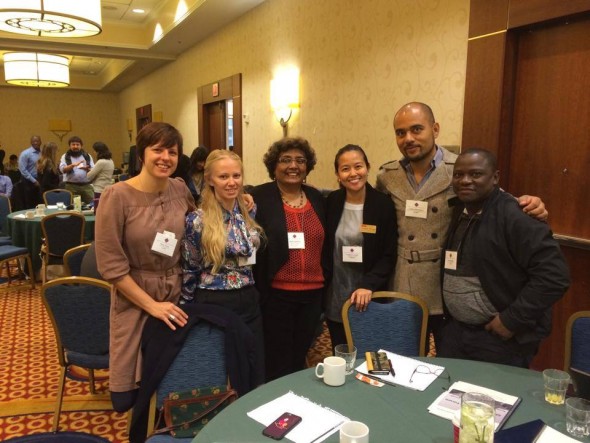 We did a team building activity called «The Tower Game». All participants were divided into groups, received several large sheets of paper and within 20 minutes they had to build a tower. Who will be able to build the highest tower would be a winner. Being a participant of  the game was not easy to do because everyone was faced with a problem. People either take a role as a leader and persuade other members of a team to trust them or delegate the function of leadership and believe that the other leader will be able lead a team to a victory. As everyone was a leader in the team, difficulties had occurred even at the stage of defining the tower model. The first lesson has been learned – you must be able to choose a leader with whom you’ll reach success or become a leader by yourself.

Not a boiling frog

Frogs when dropped into a pot of boiling water will immediately try to hop out of the pot to save themselves. The thing about these frogs is if they are dropped into a pot with water that is gradually boiled, they do not react the same way. Unaware, they boil to death. The cohort (Nine Fellows) believes that we are all boiling frogs if we do not act to mitigate climate change. Every action, no matter 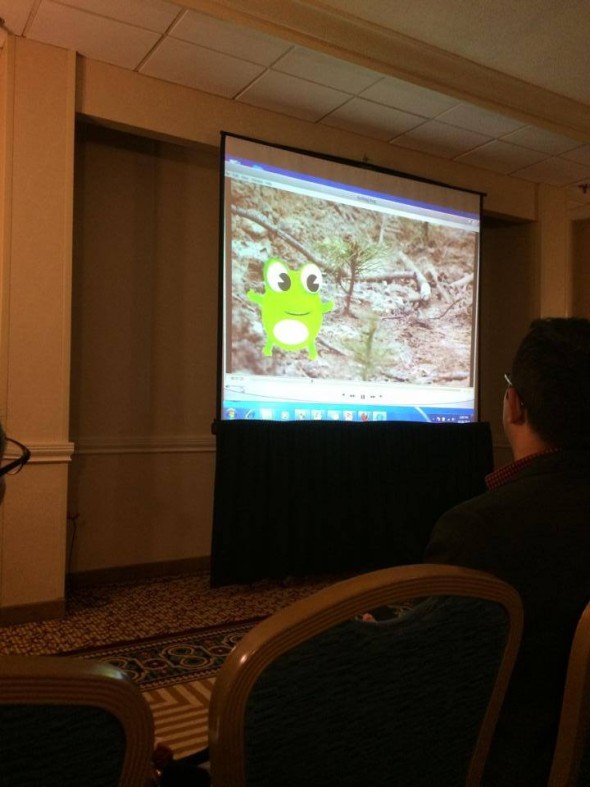 how small, counts! Nine Fellows (represented by their ‘frog avatars’) said the adverse effects of climate change in their countries. They cut  the animated frogs in a pool shaped like a
globe. Each frog is representative of the nine fellows at Cronkite. The frogs talked/ swam in the pool. After a few seconds, the pool started changing color until it became lava red and started to boil. The frogs didn’t notice. We shot and shared videos and pictures on Facebook and  Twitter (@CronkiteHHH) related to actions fighting climate change. For instance, I am a Humphrey Fellow from Russia want to plant trees to combat climate change. Everybody can join this movement and do tag us using #notaboilingfrog on your various accounts.

I have been in D.C. before but this time I saw Washington from different sides as a main c 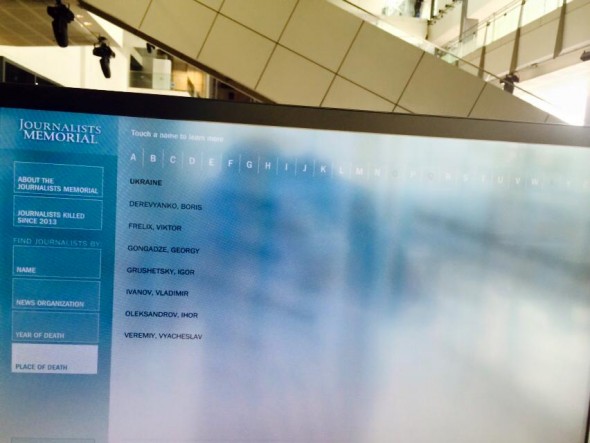 apital. We did a lot of sightseeing. I met with three American presidents in stone – Abraham Lincoln, Thomas Jefferson and John F. Kennedy. I visited four museums. And I found one important thing for me in Newseum (an interactive museum of news and journalism). On the stand dedicated to journalists who were killed
during the military conflict in Ukraine, I did not find the name of my colleague Andrew Stenin, agency “Rossiya Segodnya” photojournalist who was shot in Ukraine in August 2014. I reported about this to employees of the museum and hope that information about the Russian photographer will appear in Newseum very soon.

Meeting in Voice of America

There are many journalists from Russia that now work in Washington. Some of them working in Russian media, others on American ones.  My colleague Vadim Massalsky is one who moved to Washington and now works at Voice of America. Several Fellows from Cronkite met with him in the VOA editorial office and answered his questions about modern journalism in different countries. We talked a lot about propaganda in modern media, about objectivity and how journalists need to not be a cynic. Coordinator of the Humphrey Program in Cronkite School Professor Bill Silcock summed up the meeting of what should be a modern journalists:

“I believe that journalists whether in Russia or in America or for example in  Middle East must do a better job telling people about what is happening and why … And I think modern audience having access to advanced media technology is able to determine who is telling the truth and who is not.”