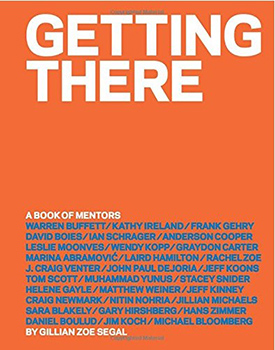 How exactly do you get there? By “there” I mean the height of your career and that stage in your life when you can confidently say you’re “successful.”

This is why I appreciated reading “Getting There: A Book of Mentors” by Gillian Zoe Segal. It was the voice of 30 leaders from various fields: the sciences, arts, media and business.

The author, Gillian Zoe Segal, elaborates in an interview with Du Jour that she made this book with the simple intention of helping others, and that the hardest part was actually getting the big names to agree to participate.

In the author’s interview with Du Jour, she shares the hardest part of putting the book together:

“How did you get your subjects to open up about such personal facets of their lives?

The hardest part was actually getting to the people, but [soon] they got to know that I wasn’t out to get them or make them look bad and that the book is really a celebration of them and what they have to offer others. A lot of people said it was half therapy and half interview. There were times where I was like, “Hmm, you think the way your mother raised you had anything to do with that?” It sort of forced them to look inwards more than you might do on a regular day.” 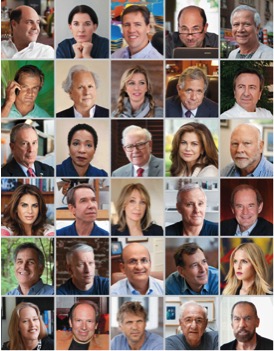 Warren Buffet and Anderson Cooper resonated with me because both of them confessed that they used to have a bad case of stage fright!

“Up until the age of twenty, I was absolutely unable to speak in public. Just the thought of it made me physically ill. I would literally throw up.”

But then Buffet explains that he acknowledged this fear and thus enrolled in a public speaking class. And up to this day, it’s not his diploma from Columbia Business School or University of Nebraska that’s proudly hanging on his wall, but the certificate from that speaking class.

Anderson Cooper’s account was very personal as well as he shared his loss when his father passed away, and his brother committing suicide shortly after. This loss has driven him to war-torn areas to cover how people cope in the most difficult situations.

Sara Blakely confessed that she failed the LSAT twice and had to work in Disneyland wearing a Goofy costume before she eventually came up with the idea of footless pantyhose that became the foundation of the multi-million dollar brand, Spanx.

Marina Abramović meanwhile had a very controlling mother and this seems to be the backdrop of her search for ‘freedom’ through her art.

All these personal struggles, made these famous people more “real” to me and thus made the journey to “there” a more encouraging one for any reader experiencing difficulties but aspiring to reach those heights.

Every story had its unique twists and turns, and not everyone knew exactly where they wanted to go or what they wanted to be in the start. But there was one thing common in all thirty individuals, and I call it the “click” moment.

Even if they didn’t know their passions right off, once they saw it, once they acknowledged it, once there was a “click” in their brains of what they really wanted to pursue, they did everything they could to achieve it.

And I think this is what separates the leader from the pack, and what ultimately makes great stories of “getting there.”

Written by: criseldacaringal on December 4, 2015.