Going from an audience of my immediate peers to a global audience that includes future employers and people  who follow the news has been interesting. I am not just writing for me, but for the world — literally.

I knew I was presenting myself to everyone, but I have recently realized the importance of a global brand.

Growing up online has prepared me for this in unexpected ways. I am not the same teenager posting about her favorite bands on social media, but the lessons learned as social media was growing have stuck with me and influenced the journalist I am today.

Even though I have recently become more aware of what it means to have a global brand, I have been conscious of my social media presence for years.

Social media has been a constant in my life, and growing up with it has taught me what to do and what not to do. 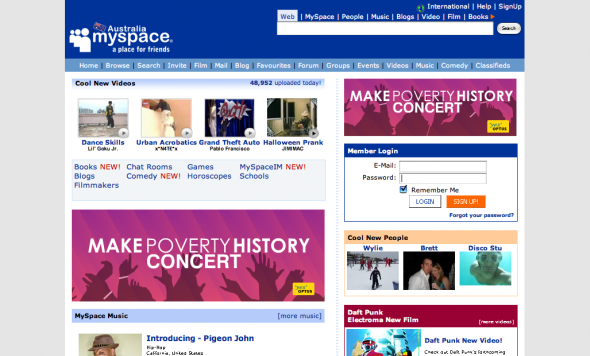 This website made me think about social media and its role in my brand from an early age (IMG Credit: Jim Whimpey)

When I was younger, my profile on social media websites was carefully pieced together. I wanted to project an image of myself. Social media platforms have changed, but learning to craft an online image is something that we all still do.

My profiles not only show who I am, but that I am an actual person.

There is no point to an audience if you are not engaging with them. Having conversations and meaningful interactions is essential in putting a personal level to platforms that can seem impersonal as followers and posts increase.

When I was active on Myspace, it was common courtesy to comment back on somebody’s photo if they commented on yours.  I have learned that to have other engages with your posts, you must engage with theirs.

Even if a journalist is engaging with person, the whole world can see the interaction.

Some may argue a more private profile is way to remedy this lack of privacy, but growing up online has shown me differently.

In high school, a select group of students decided to detail the rules they were breaking on school grounds. In less than 24 hours, these same students went from talking about ditching class to out of school suspensions and expulsions. All of these students had private profiles, but word still reached the administration.

Social media is used to establish a global brand because it is global — and everyone has access to what is posted, whether you are a student or a journalist.

And it can take one post to ruin a brand, no matter how hard one works to maintain it.

One can look at Justine Sacco’s Twitter fiasco to see how one Tweet can impact a brand. A few years back, Sacco posted a Tweet she thought was funny. However “tens of thousands of angry tweets” were sent in response and her name, reputation and career were ruined in the process.

But Sacco’s story  does not scare me. Using social media  platforms has taught me the best methods in which to share content. I am comfortable on social media, and I have seen plenty of examples from those who have shown how not to use the platforms.

Social media is used to enhance one’s brand, so one must use social media to their advantage. Being comfortable on any given platform enhances how social media can impact a brand.