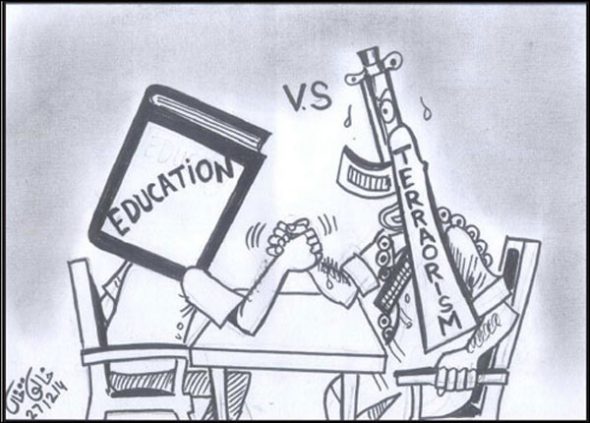 I was asked to blog about what would be the solution for terrorism? I will write based on my experiences in my home country Egypt. Why do we have terrorists? How are they recruited? What do they seek by joining these groups? what can governments do to reduce terrorism?

I believe that terrorism is of one of the main outcomes of poverty. Studies have shown that there are so many factors that lead people to leave their countries, where they grew up and lived their whole  life to go and join war and be part of terrorist groups. Such factors include, unemployment, lack of jobs and opportunities. People from these places are usually furious and concerned about their futures. These people are easier to approach and radicalize. Governments needs to understand that they don’t need to fight terrorism by chasing terror leaders and killing them. They need to understand that fighting poverty and providing opportunities for youth is the main solution to win this fight.

Lack of education might be one of the reasons as well. It is obvious that less educated citizens are more likely to be most vulnerable to be recruited by violent movements and groups. In the meantime, recent studies have shown that education would cutdown the participation in these groups but it is not the main element. A lot of educated people have joined violent political terror groups, which proves that education alone is not the core solution all the time. Education might be in special circumstances one of the reasons for individuals to join terrorist groups. For example, when an individual receives a high level education and still is unable to find employment, this leads to frustration and ultimately that might lead them to join violent groups. Also, it makes them an easy target to approach. Meanwhile,there is more than education that needs to be done.

Civic engagement could be one of the keys solutions, including young people politically can change how we define a citizen. There is so much work that needs to be done by the governments to include everyone and teach them. Rejecting marginalized populations in well developed countries have shown to have terrible consequences. Studies have shown that engaging young people in activities such as community  service campaigns, and raising awareness about vital issues such as illegal immigration would reduce the number of  individuals joining violent movements. Education is critical and essential to fight terrorism but engaging youth in societies and giving them the opportunity to use what they have learnt has a stronger effect.

View all posts by Ahmed Elashry →