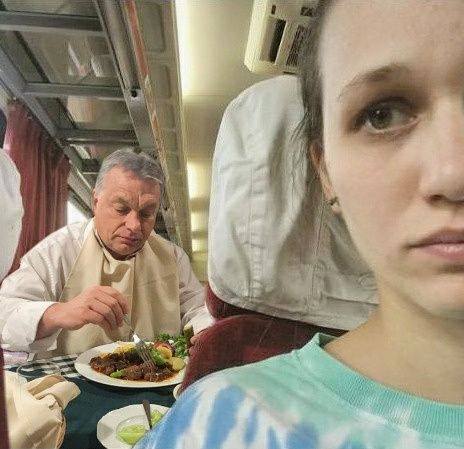 My colleagues and fellow Hungarian journalists already feel the consequences of the so called “war on journalists”, which was declared this summer by Viktor Orbán, the country’s prime minister since 2010.

Right-wing trolls have been desperately searching my colleague’s personal social media profiles, looking for any kinds of content that could be used to discredit them. Since Hungary is a member of the European Union, there are certain red lines the government is unable to cross – unlike in Turkey or Russia, where journalists might get jailed -, but tasking their propagandists to write articles personally attacking respected professionals who work for independent outlets is a tool they can utilize.

Just a few days ago, anonymous articles targeting three of my colleagues were published by pro-government outlets. These were all based on some of their older social media posts.

My colleagues posted photos on Tumblr showing old people eating smelly food on the train – an embarrassing habit in Hungary, not just among the elderly -, and another one where old supporters of the governing party were illegally tearing down political ads of an opposition party. The photos were accompanied by ironic comments mocking these old men and women.

They posted these ages ago, and  back then, the pictures didn’t attract any attention. But later somehow they were found by Hungarian alt-right trolls and were sent to propagandists working for the government. Based on the pictures, different propaganda outlets started a coordinated attack on the journalists, claiming they are disrespectful to old people and incite hatred against pensioners.

No matter how ridiculous and pathetic these attacks are, there is a lesson to be learned.

My colleagues’ Tumblr accounts usually contain personal stuff, random photos and videos, short comments on politics, jokes, funny GIFs, often about cats. Mostly, they don’t even use Tumblr under their own name, and these accounts are not connected to their professional work at all. The views represented in these Tumblr posts are strictly personal ones as their target audiences are friends and other likeminded journalists. The average number of their followers are a couple of hundreds or maybe thousands. It is also important to mention the cultural context: the Tumblr universe of Hungarian journalists is a tiny subculture heavily based on irony and online humor, photoshopped pictures, Coubs and GIFs. There is common language, where the real meaning is not always obvious for outsiders.

But when a government declares war on critical journalists, it doesn’t matter. There is no such thing as a personal account anymore, even private and restricted posts could get published, taken out of context and get manipulated. Your private social media self can be easily blurred with your professional image and public track record. Remember, you always leave online traces and it isn’t hard at all digging up your social media activities of years back.Be aware of that. Be cautious. Always think twice before posting anything.

But the most important thing is to keep calm and never lose your sense of humor. If your ironic comments and old photos are all they can find in your online past, you’re fine. My colleague, Fruzsi Előd reacted to the attacks by posting this photoshopped picture, where the old lady was replaced by the prime minister.

2 Comments on “If you’re a journalist, your enemies could be digging up your social media posts”