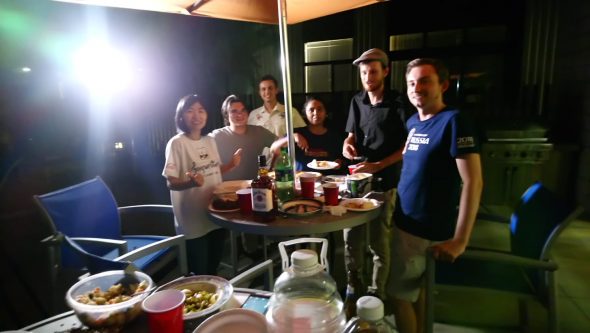 There are roughly 6,900 languages spoken worldwide by 7.4 billion people, but there is one language that is universally understood—the language of good food.

Every culture boasts a different tradition of food, from large events like Thanksgiving to the nightly ritual of coming together around a table for a meal with friends and family.

So what happens when you bring together a geographically and culturally diverse group of people to enjoy a meal? A lot of good food, cultural education and of course, lots of laughs.

On Friday night, in the evening glow of the setting Arizona sun, a multicultural cadre gathered by the pool at Roosevelt Point in Downtown Phoenix to serve up a fresh meal of Russian Barbecue Chicken, rice and vegetables with Ethiopian inspiration, fried chicken with Chinese spices – and the most American – Apple Pie with ice cream.

The music from first Friday wandered in from the street outside and the sounds of clinking glasses and laughter filled the pool area, and the good food was complemented by a varied and passionate discussion about the cultures of each place.

Russian Journalist Alex Gorbachev, who cooked a secret recipe of Barbecue Chicken said he was experiencing American culture through the Apple Pie.

Li Lan Wu of China made fried chicken with green pepper and celery. The group which was named “the best group.”

Adey Tegene cooked a spicy take on rice and vegetables. Spice, Tegene said is a key aspect of her native-Ethiopian food.

Overall there was an underlying sense of companionship and shared sense of culture through the great taste of food.