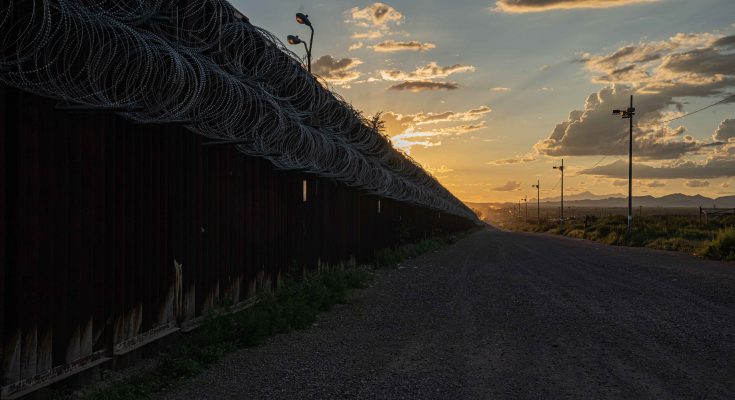 As a journalist from a country like Myanmar, a country with a huge immigration issue, I was so excited to come to Arizona and visit border towns. Since the beginning of our program, I have always asked about when we were going to visit the border, even though I don’t know very much about the US-Mexico border towns. As a photographer, I would like to get images of migrant caravans, the huge iron wall and I want to witness the chaos from one of the most developing countries.

I have been to almost every border area of Myanmar. Almost every one of my trips to border areas in my country made me excited. I think there are a lot of stories to be told along the border. Millions of Myanmar people had crossed to neighboring countries such as Thailand or China to get better life standards. Despite the beautiful landscapes of the mountains, a lot of tragedies are going on. For example, there is a large number of crimes involving drug trafficking, illegal logging, etc.

When we hit the road, I didn’t expect to see beautiful landscape. I had a patriotic mindset that I came from one of the most beautiful countries of Southeast Asia so the landscape from the Southwest wouldn’t impress me. But a few hours after we left Tucson, the landscape started changing, and it is amazing. It reminded me of the landscape that I had seen in Northern Shan State and China border. The only difference along the highway between here and my home country is that you would see a lot of small villages along the road.

I was getting more excited as we got closer to the border. I felt frustrated with my T-Mobile reception since my data coverage was unreliable. When we arrived in Douglas, the border town with Agua Prieta, from Mexico side, I was expecting to see a razor blade wire fence and check points, but I saw a peaceful little town with some small old buildings. Our group was welcomed by the city manager and some members of the community. The first impression for me was that they were friendly. We were told that the mayor would join in shortly. My stereotype brain was obsessed with the thought that we would be meeting an old white male who would be telling us some boring stories about the town.

A few minutes later, I learned that all my expectations were wrong. A cool Afro-Latino guy in his 30’s wearing a casual white cotton shirt was standing in front of us and talking about his town. Robert Uribe, the first Afro-Latino mayor of Douglas was also the youngest elected official. Additionally, he was born in the Dominican Republic and grew up in New York City. He looks more like a young artist rather than a mayor of this town. He didn’t have any security guards or any motorcades when he came to the town hall to talk to us.

According to his speech, I learned that he also misconceptions about Douglas. He said he was worried about being kidnapped before he was here. I think he fell in love with this town and then ran for mayor. He said, “I actually feel safer here than New York City quite frankly,” after he mentioned how he felt insecure before he was here. He even mentioned that he got his hair cut on the Mexico side since it’s a lot cheaper over there. And, he prefers crossing border by foot or bicycle. Is it that easy? How come he doesn’t worry about his security?

Also, Mr. Uribe courageously mentioned his opinion about the new wall that has received a lot of coverage in global news. “I don’t support the wall. I openly said that often as much as possible,” he said. I had some questions in my mind like why he didn’t support the statement or idea of his boss from the Capital. And, I realized that how freedom of speech is attached in the mind of American people.

The conversation with Mr. Uribe reminded me of some government arranged trips in Rakhine state that I had joined to cover about Rohingya crisis in Myanmar-Bangladesh border. I am not sure if these two locations are comparable or not. Northern Rakhine State, which borders Bangladesh, is where Rohingya people from Myanmar are very critical and oppressive to journalists. Two Reuters journalists were in jail for more than a year because of their investigative report about the massacre in that area. According to different international reports, local Rohingya people have suffered from military operations and more than 700,000 Rohingyas fled to Bangladesh. But it is really difficult, especially for international journalists, to get access to that area to cover stories about what really happened there. We had to register to get there and then government officials decide who would be on the list of the arranged trip to get there. They wouldn’t take anyone who had registered.

Once you’re on the list and you get to Rakhine State, you’re escorted with police and government officials. You would only see what they show you. You’re not free to go wherever you wanted. The reason, according to the official was very simple, security. They are worried about something happening to you, so you’re escorted. You’re only allowed to interview selected people.

I can’t disagree if someone says there are armed forces and Northern Rakhine state is like a warzone. But the Myanmar-Bangladesh border is as newsworthy as US-Mexico border and it is identically critical in the global political trend. But the way journalists were treated here in US-Mexico border is so different than my experience from my home country in terms of covering the border crisis.

Personally, I haven’t not been to some critical or dangerous US-Mexico border cities like El Paso or San Diego. But Douglas is no less important than these cities. The fact that impressed me about Douglas is how journalists are free to work and roam as well as how Mr. Uribe, and other officials, is aware of freedom of expression. And, the other impressive fact that I learned here is that a Dominican-born Afro-Latino man was elected as a mayor. I wouldn’t be able to see this situation in my country within the next few decades, if we remain in the current system.