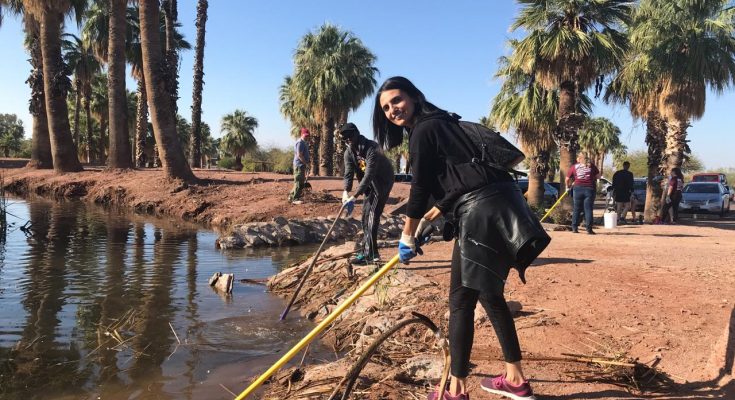 On November 17, Ha, Radovan, Pierre, Monica, Noreen, Terry and myself went to Papago park for the Watts College day of service. We arrived at the park with no idea of what kind of labor we were about to take on.

I personally thought that I would be picking up candy wrappers while walking around a green and shady park, but I was wrong. Papago Park was nowhere close to green and shady and my job turned out to be much more challenging and fun than what I had anticipated.

I was part of the clean-up group. Radovan, Ha and I joined the cat tail cleaning group and the other  fellows went out to do other cleaning duties. I had no idea what a cat tail was, why we needed to take them out and I definitely didn’t know how. Each member of our team was given a pair of gloves and a rake before we went off to hit those creeks.

There was nothing in plain sight that resembled a cat’s tail to me. I asked around and I discovered that no one knew what it was either. I couldn’t help but think how close this experience was to life! You’re presented with a problem that you have never encountered before. You have no idea how to tackle it, because you don’t even know what it looks like, but somehow you need to figure out a way to solve it and move on to the next thing.

I accepted the challenge and went to explore where those cat tails were. I joined a group standing by a couple grassy bushes that were blocking up one of the creeks. We all had rakes and we’re trying to figure out a way to clear that space up.

We started by combing through the stubborn grassy chunks. We spent a good half hour or so combing through but nothing was coming out. They were rooted in the creek. An idea came to me. I thought why not use shovels to get at the roots, and dig them out.

I called out to the park ranger who had just passed us by and went with him to get us a couple of spade shovels not knowing if they were really going to do the job or not. I thought there was no harm in trying. Radovan took one of the shovels and shoved it deep under a grassy chunk, and what happened next amazed us all. The root came right out, but it was connected to this horizontal mass of dead and muddy material, which we soon realized was what we’ve been looking for. It was our cat tail! Finally! Radovan dug up a piece of it, and soon more  volunteers started joining, bringing more shovels and digging up the roots.

We were on both sides of the creek. Half of us digging into the roots from one side and the other half pulling the root out with the rakes. Soon enough, more of our cat tail started to  show as we worked on it.  We kept digging and pulling until, finally, the whole thing materialized.

Now we wanted to pull it out on to the bank of the creek. The rake team did most of the work there. We went at it several times, each time accumulating our power to pull at the count of three. It took us a few trials until we managed to finally pull the whole thing out! It lay there like a dead whale.

I went to the park that morning not knowing how challenging this job was going to be. I left with a sense of achievement and a reminder that you don’t have to know much about a problem to be able to solve it.

Life never gives you instructions or shows you charts. All you need to do is try hard, fail hard and always seek the help of others.