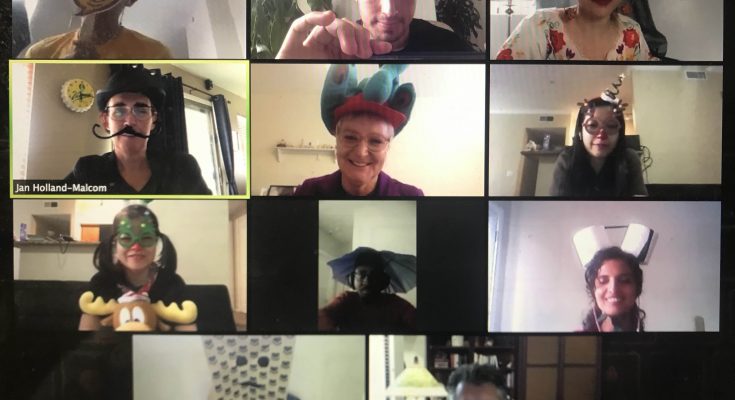 Yes, DISTRACTION and FUN! That was the theme of our last community meeting.

“Since we are all in self-isolation, we are going to have a little bit of fun partnered with the business of the community meeting…we all need laughter, right?” Exclaimed the email from our beloved program manager, Jan Holland-Malcom.

Each Fellow was required to “dress up, create a costume or crazy hat/headpiece and come to the meeting!”

The whole event became even more elaborate when she dubbed it a CONTEST! The winner was to leave with a $10 credit to the ‘take out’ restaurant of their choice!

Then, the fellows swung into action, creating crazy stuff that would bring a smile to our faces during this crazy time of COVID-19, social distancing and isolation.

Noreen Khan, winner of the costume contest and creator of Robot Bear, said:

“I created a robot bear because during this time our communication becomes too technical and robotic where we are just connected through the screen. So, we are actually behaving like robots, without a human touch.”

Another costume that stood out was Sparky the Reporter. The creator, Terry Cui, said:

“Because of the social distancing, we haven’t seen our Sparky for a long time. And I was a broadcast journalist before I came to the US, so I decided to create a costume about a Reporting Sparky. I used a handholding mask, a microphone and a peaked cap to achieve my plan.”