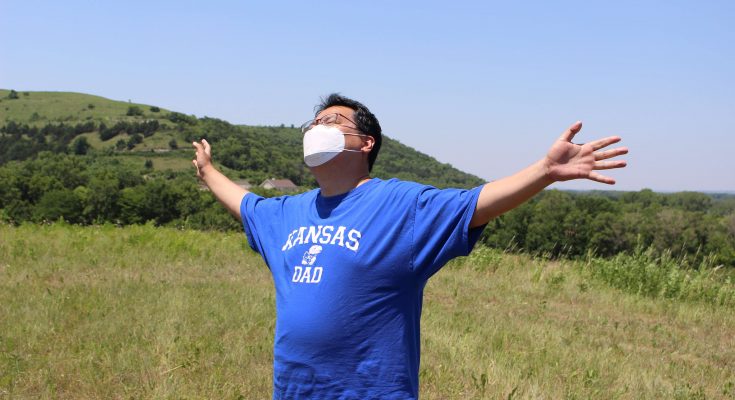 Many former Hubert H. Humphrey fellows wrote about life in Phoenix, research topics at Cronkite School, or Professional Affiliation experiences. But there should be some before-Cronkite articles, as well as after-Cronkite ones. I would like to write about what I did at Kansas in order to become qualified for doing my fellowship in Phoenix.

I was selected as HHH fellow for journalism, and I was going to study at Cronkite. But there was a prerequisite. I need to get a satisfactory result from Pre-Academic English training at University of Kansas in order to come to Cronkite. I needed to live in a dorm, and without my family. The Institute of International Education told me that “Pre-academic English training is a benefit made available to selected incoming Humphrey Fellows”, but it also noted that “In the event that a Fellow does not satisfactorily complete the Pre-Ac program, IIE will recommend the revocation or termination of the Fellow’s award”. Thus, it was a kind of last qualification test for me.

On June 1st, I got a flight from South Korea to Kansas City. I transferred flights at the Atlanta airport. As many former fellows have also mentioned before, the immigration process was stressful. At Atlanta, I got only two immigration questions. The first question was “Why are you in hurry?” But the nuance was quite different from ordinary conversation. The officer seemed to be suspicious when I was sweaty. It was because the weather inside the airport was hot for me, thus I had much sweat.

I answered, “I am hot,” instead of saying “It’s hot inside.” The officer probably thought that the U.S. Department of State selected a strange guy who thinks of himself as a sexy icon. Second question was “What is your occupation?” I answered shortly as “Journalist.” I got approval of admission. Hooray! Then I transferred my flight and arrived at Kansas City Airport.

Later, I learned that some other fellows had horrible experiences for coming to Kansas. One fellow even got captured at the airport in Europe because he didn’t get a transfer permit for entering U.S. Another fellow came several days later because his government permitted his departure late.

Anyway, we gathered in Kansas, and 8 week’s training race started. I have been to some big cities in U.S. like New York, San Francisco, Los Angeles, and Washington D.C., but never in Kansas, especially in the city of Lawrence. It was a peaceful and calm city with the University of Kansas. And everything was green outside. But sometimes it was too peaceful. There was only one bus per hour and there was no bus on Sundays. Imagine walking for 40 minutes in order to make a bank account!

I met a lot of people who were happy and friendly there. It is also because the community at Lawrence is so small. One of faculty there told me that people can know each other like someone’s friend or someone’s student. Somebody told me that I would feel the mid-west American people at Kansas. Another insisted that there would be no saying-hellos at the road in Phoenix. (Thank you guys and their dogs at the elevator of my apartment) The other one addressed me that I cannot forget the memory of Lawrence.

Studying a long time was the only obstacle for mid-career, middle-aged, later-learners. I am 39 years old and I have worked over 14 years. But I was the youngest in my dormitory room. One of my roommates was 43 years old, and another guy celebrated his 50th birthday in the dormitory. But we tried our best in order to qualify for the main fellowship: for me, the ticket for Phoenix. While I watched my 50-year-old classmate prepare for his presentation, I thought about myself again: I am really passionate and hard-working enough for my age? Am I not ashamed for my attitude?

Finally, I finished my course on 27th of July. The next day, I got a flight and met my family at the Sky Harbor Airport. The first comment from my son at that time was “Dad, you never lose your weight at all.” But I am happy to reunite my family.

How about my English skills? I got exactly same score between the entrance ITP (institutional TOEFL) and the exit ITP exams, although I got quite meaningful improvements for my English skills. I am comforting myself with insisting that TOEFL test doesn’t always reflect my English proficiency.

Hyuntaek Lee is a journalist at the World News Desk of the Chosunilbo, South Korea’s largest newspaper. He is sub-chairman of a special committee for web portal strategy for the Journalists Association of Korea, dealing with strategic support for local journalists. He has received an Online Journalism Award of Korea and Journalist of the Month Award. Lee was also selected as a Google Newsroom Leadership Program Fellow (through the Columbia Journalism School) in the Asia-Pacific region where he worked on monetization strategy. During his time as a Humphrey Fellow, Lee hopes to learn about digital innovation in the U.S., especially at local newspapers.

View all posts by Hyuntaek Lee →