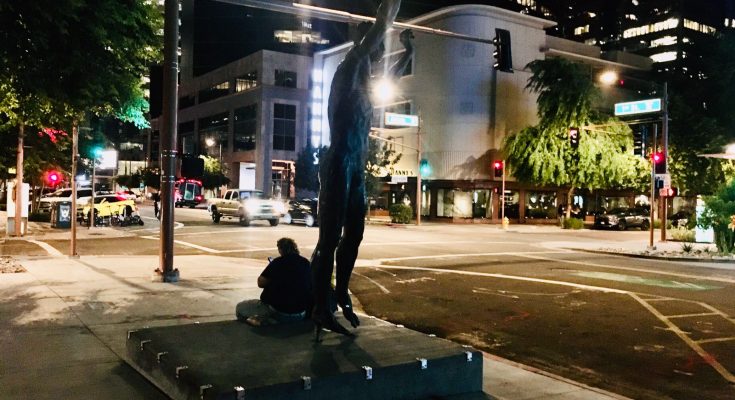 Before coming to Phoenix, I took a two-month language course at the Kansas University.  During our studies, we had to come up with any topic and prepare a Power Point presentation.  At first I was very worried, I was sure that I would not be able to speak in front of people in English.  But then, with the help of teachers who helped me to believe in myself, I pulled myself together.  I chose the topic “The Special Needs of the Elderly Homeless Population in the United States.”  For a month and a half, I collected data, studied researches on this topic, talked with homeless people.  As a result, I spoke quite confidently in front of the teachers and my classmates.

In preparation for the presentation, I came across a study from Arizona.  According to the author, one of the main needs of the homeless population in this country is respect.  Of course, food, clothing, and medical care are most important to the homeless population.  But, according to the author of the study, unlike all of the above, shelters and charitable organizations do not distribute respect.  This thought did not go out of my head.

Now here in Phoenix, when homeless people say hello or turn to me, I always response, although I used to try to avoid them, pretended not to hear.  During these two weeks I have already made several acquaintances who live on the street.  With one of them, we follow to each other on Instagram. We also had an interesting conversation with another homeless person.  He asked where I am from, and then said “Let me guess, you are from Yugoslavia!”  I tell him, “Buddy, this country has not existed since 2003”.  He was very surprised and asked me to tell everything that I know about Yugoslavia.  He was not on the way with me, but he was so interested that he took the same bus with me and drove 5 stops to talk about a topic that interests him.

With each such new acquaintance, I understand how strongly I was subject to stereotypes about homeless people and that it is very easy to change this situation.  You can just answer the greeting and smile.

Milana Mazaeva has worked for the BBC News Russian in Moscow since 2017. Previously, she worked as a freelance journalist. Mazaeva began her journalism career in 2009 working at a local TV station in Chechnya, where she covered local news and the North Caucasus. During her time at Cronkite, she hopes to broaden and expand her knowledge in producing stories with a global perspective and is interested in documentary production.

View all posts by Milana Mazaeva →