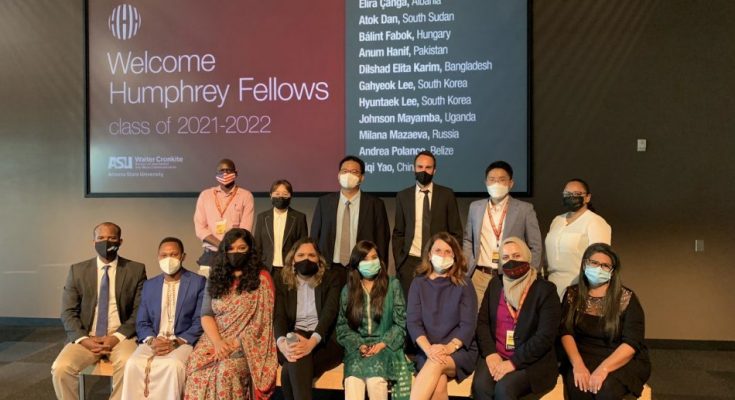 I have had quite a few surprises in my life. As a journalist, as a mother or as citizen of a country which never lets you get bored! But nothing compares to what I am doing now: I am a student again at the age of 40!

I had decided to apply a year ago to the Hubert H. Humphrey Fellowship after 20 years of work experience as a journalist and media developer.  But, I never thought that exactly a year later, I would come out of Sky Harbor Airport in the middle of the night, carrying my life in just four suitcases, to settle down for the next ten months in a city I had never seen or visited before.

Sometimes you need a break from whatever you are doing, to stop, think, recharge batteries and then re-start at a new speed. For me, this change started with new classes at the Walter Cronkite School of Journalism, daily assignments, weekly deadlines and so much more.

Life of a student! The unbearable lightness of being….(and I remember I read the book my during the university years). How much I have missed it in all these years with running after news, projects and meetings…!

I am busy, not in a hurry, I love following the classes and meeting with other students from the U.S or my colleagues from 13 different countries. I am a bit stressed by meeting assignment deadlines and reflection papers for sure, but who isn’t? I was bombarded with information in the first couple of weeks, but I finally managed to put a reminding system in place for me, so that I cope with different deadlines. This is so much an element of American life, in contradiction with my chaotic Albanian style.

Among everything I have to do, I still have time to run for 20 minutes in the morning and do some yoga on different days. And I am back to visiting museums and parks. The last park I was at was the Japanese Friendship Garden, an unbelievable oasis of greenery in Phoenix. By all standards, this was quite a surprise in the dessert.

Well, life has thousands of ways to surprise you, even when you think you have planned everything!

Elira Çanga has worked as a journalist in Albania for the past 11 years. She works as a media project manager at the Organization for Security and Co-operation in Europe and her goal is to modernize the public service media in her country and enrich journalism curriculum. She has previously worked as journalist and producer for the BBC and as a Media Team Leader at USAID. Çanga is experienced in media development and international affairs, with a master’s degree in EU Studies from Centre International de Formation Européenne. She has spent 10 years working on media development to encourage investigative reporting and fact-checking, as well as training and mentoring young journalists on media and information literacy and countering disinformation online. During her time as a Humphrey Fellow, she hopes to improve as a journalist and media developer to make stories more impactful and to help guide future generations of reporters.

View all posts by Elira Çanga →