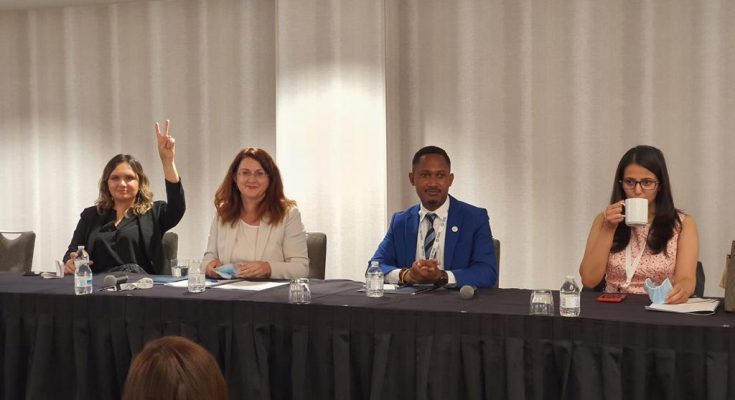 One: “Broadway is back!” at New York

A week before attending Global Leadership Forum(GLF) in Washington DC, Humphrey fellows at Arizona State University visited a city crowded with people from all over the world, New York. Especially for me, I could learn in person how this city was dealing with Covid-19. To enter indoor spaces, people must show two things: Photo or hard copy of an official vaccination record, Photo identification.

No matter how strict the rules are, how people stick to the rules can make or break the system. Based on what I’ve experienced, people in NYC stick to the regulations well.

When I visited the New Amsterdam Theatre on Broadway to see the musical Aladdin, I could feel the excitement of the staff and audiences. The theatre welcomed the visitors posting the sign ‘Welcome Back” or “Broadway is back!” The atmosphere was like a celebration. Everyone waiting on the line to enter inside was talking about the return of the most famous live performance after more than a year of shutdown. At the same time, I could realize that the harsh reality of the Pandemic is not finished. The theatre staff were shouting to people on the line kindly but flatfootedly: “Be prepared to hold three items. Your Photo ID, Vaccine proof and ticket!” For me, the shouting sounded like a fierce promise not to make Broadway closed again.

The situation was the same in other places. When I visited the Empire State Building with some of my fellows, the ticket collector checked our vaccination records and Photo ID very thoroughly. He confirmed not just proof and ID itself but the name on it and the type of Covid-19 vaccine. One of my fellows finally could not enter the building because she could not meet the New York’s regulation that only FDA authorized vaccine proof were allowed. When I visited the 9/11 memorial and Rockefeller center, I also had to follow very strict vaccine proof procedures as if I had been in airport security.

Two: “Voice of Voiceless” at GLF

The 2021 Global Leadership Forum was held in the Washington Marriott Metro Center Hotel sponsored by the Bureau of Educational and Cultural Affairs, U.S. Department of State and administered by the Institute of International Education from October 18th to 22nd 2021. Among the many of sessions, I would like to pick the Press Freedom session as the best one. Three speakers from Walter Cronkite School of Journalism and Mass Communication at Arizona State University Johnson Mayamba, Elira Çanga and Milana Mazaeva gave us their personal stories. However, those were not just experiences of overcoming adversities; they showed us a conviction for what they had been doing as a Journalist and how they want to make their works bright in their own communities.

Especially among the stories, Johnson’s personal experience made me think a lot. When he covered news for the sake of freedom of press in his country, he got into an unexplained car accident and had been arrested more than ten times by the authorities. At the floor, an audience asked him why he had suffered much adversity in his career as a journalist. Johnson’s answer was cliche but lingering.

“As a journalist, I want to be a voice of the voiceless”

Three: “Communicate and compromise” at Meeting with ICIJ

Earlier this month, International Consortium of Investigative Journalists (ICIJ) published ‘Pandora Papers’ which is an explosive investigation report regarding world leaders’ hidden money. At the end of the GLF trip, we had a chance to meet Scilla Alecci who is an ICIJ Reporter and coordinator of Asia partnerships. For me, ICIJ’s working process is a good case study of newsroom leadership and media organization management. How had more than 600 journalists from 117 countries worked together under the common purpose for finding out veiled corruption? How could they make the whole process be on the same schedule? What was their method to keep the published output at the same level of quality?

Scilla explained that the key of the teamwork was communication and compromise. For example, each participant had a different opinion when the best timing would be to publish their Pandora Papers story, because the members were from different political situations or public sentiment. Scilla said, “To decide the deadline of the investigation or to set up the date of release of the report simultaneously, the participants frequently and regularly gathered together both online and face-to-face” It was simple way; but the surest way.

Gahyeok Lee is a staff reporter for JTBC, the most trusted South Korean nationwide TV network and Hey.News, an Instagram centered news service. Lee started his journalism career in 2011 and he has covered both local and international issues throughout his career. He wrote about his experiences at historical news scenes such as the Korean candlelight movement in 2016 and published a book “Memory of the Day” in 2017. It was also translated into Chinese and published in Taiwan in 2019. In 2019 and 2020, Lee hosted a four-minute daily prime time segment called “Gahyeok Lee’s Factcheck” that gained recognition as a signatory member of the International Fact-Checking Network in January 2020. During his time at Cronkite, Lee hopes to improve his English communication skills to expand his global perspective.

View all posts by Gahyeok Lee →