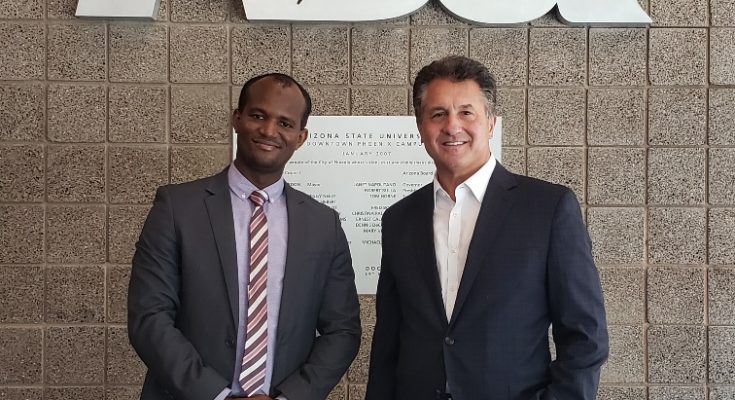 It was sometime in 2019 on a Friday morning, I had gone to accompany a cousin to attend to a doctor’s appointment, when my phone rang and in the middle of the conversation with the doctor I pleaded with him to allow me answer the unknown caller. On the other side of the telephone the caller said ‘’Hello I am calling you from the American Embassy, are you Mohamed Asmieu Bah” my answer was in the affirmative. “You applied for the Hubert Humphrey sometime back,’’ the caller went on, ‘’and you have been shortlisted, so come for an interview on ….’’

The above is how I received notification from the American Embassy informing me that I had been shortlisted for an interview for the prestigious Hubert Humphrey Fellowship, named in honor of the 38th Vice President of the United States of America. The fellowship was named after him because of his sterling performance as a lifelong public servant and extraordinary leader.

I came to know about the Hubert H Humphrey Fellowship through Facebook one day when I was browsing the internet in the office during my editing work. When it showed up on my desktop, I thought it was a scam so I didn’t treat it with seriousness, but I decided to screenshot it and kept it in my phone.

After a few months on a Thursday afternoon, I saw the picture that I had snapped in my phone gallery, and read it carefully. It was at that moment that I had to trace the Facebook page that I had seen the advert on and read with care and caution the necessary criteria that would enable me to apply for the fellowship. My focus was on public service broadcasting because I work in Sierra Leone’s first public service broadcaster after South Africa and Ghana. I carefully wrote the one pager in order to meet all what they had asked for. Writing one page might sound easy but it is not because you are asked to keep your ideas within a range and in this context one page. I am used to writing for competitions, I did it in 2013 when I applied for the United Nations Reham Alfara Fellowship where I competed with others but I emerged as a the sole candidate from Sierra Leone to take part in that UN premier fellowship that took us to the world body’s headquarters in New York and Geneva.

What was difficult this time compared to the 2013 fellowship was that for this one, the applicant was asked to write his field of study, his interest and what impact his study will create after his return from the US. The framers of the question had so many things in mind, but one thing they wanted to know was whether the applicant will be realistic and come out with an original and tangible plan of study.

The time I first applied for the fellowship I had not been elected as National Secretary General of the Sierra Leone Association of Journalists, so I had nothing that would have held me back to come pursue a new path. But by the time they accepted me, our election had been conducted and I had been elected  the scribe of our association. I was in a dilemma because I had spent just a few months in office, was still learning the job, and I didn’t want to leave the country for a whole year when I had just been elected to serve my colleagues.

Months into the pandemic, I got a call from the Embassy again asking me if I was still interested in the fellowship, you know my answer already. This time we didn’t go through the laborious English proficiency exam but were asked to fill the form similar to the one we had filled which took us almost three months to complete.

In May 2021, we received our visa and all the fellowship’s paraphernalia to proceed to the US. My first two months were spent in Lawrence at Kansas University where we did our pre-academic course. We were fortunate to be taught by accomplished academics that can best be described as the best academic breed that one would like to meet in the classroom.

The Hubert Humphrey Fellowship is indeed a prestigious Fulbright program funded by the United States government which will enable you to realize your potential, build on your weaknesses, carve a new path, enter into a new realm of connections and usher in a new dawn in your professional journey.

Coming from a third world country where the universities are in deficit of tutors and infrastructure, I thank my star to have been accepted at one of America’s greatest journalism schools.  Walter Cronkite School of Journalism and Mass Communication at Arizona State University, like Hubert Humphrey, the school was named after a man who was described as the conscience of the nation because of his idolized status in the field of journalism. Arizona State University prides itself on the people it accepts, not the ones it excludes.

When we arrived at ASU from Kansas, my desire was to pursue pure ??  journalism, but after our first week of orientation I decided to learn something new which is public relations. Upon completion of the Fellowship, I hope to have learnt new skills that will change my life which I intend to use and help bring change to my society especially among young people who are desperately in need of hope.

In October, all the 2021 Fellows converged in the Nation’s capital near the White House and the office of the late Vice President Hubert Humphrey. The symbolism of the venue for the conference cannot be overemphasized, as Fellows we had the opportunity to listen to scholarly presentations, which left me and many others with a new synergy and timber to become the next agents of change in our respective countries.

The author is a 2021 Hubert Humphrey Fellow based at Arizona State University. Mohamed works for the Sierra Leone Broadcasting Corporation and he is the National Secretary General of the Sierra Leone Association of Journalists.

Mohamed Asmieu Bah is a broadcast journalist with 15 years of experience in the field. He started as a reporter at the Sierra Leone Broadcasting Service after he finished high school where he trained to become a radio and television presenter and producer of news and current affairs. Bah works for Sierra Leone Broadcasting Corporation and has presented one of the most popular television programs, “Lunch Time Break”, since 2010. He holds a Master of Science in diplomacy and international relations from Fourah Bay College and is pursuing a Master of Philosophy in political science. In 2013, he was a Reham Alfarra Fellow. Bah was elected as the National Secretary General of the Sierra Leone Association of Journalists in 2019. As a Humphrey Fellow, Bah hopes to deepen his knowledge of journalism, leadership, and governance. He would also like to sharpen his skills in research, leadership, academic writing, media ownership, experience with American media and American governance systems and policies.