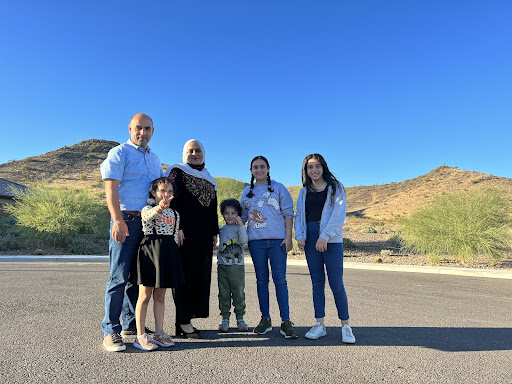 After three months at my new apartment, everything is great here in Downtown Phoenix. We started our life in phoenix as a family of six members, yes, don’t go back to read it again. As a Humphrey Fellow, I attend the Walter Cronkite school, mingle with my international family the Humphrey Fellows, attend an elective class and Humphrey seminar, then go back to my apartment. There, my Husband is helping me to finish my fellowship year with patience and a smile. He promises this is my time to follow my dream academically and professionally.

Since I rented the apartment, we have got two waste bins, one is blue and the other is black, there is a restricted direction to separate waste from the other.

Back in my home country, environmental issues are a very important topic because of the lack of resources. Additionally, living among settlements in the West Bank and the shortage of municipal services in many villages and towns makes finding ways to recycle waste very difficult. It also makes using natural resources for survival, such as solar power for heating water and, recently, for lightning, composting vegetables and fruits for fertilizing soil, and systems for separating waste water from housing water for watering gardens also extremely strenuous.

The Middle East contributes around 5% in global warming annually, Morocco utilizes the largest amount of solar energy on the African continent. The sun is the most important source of life, and we have sunny days almost all year during every season. We use this natural resource in a very simple way in my country, such as water heating, drying clothes, charging electricity in some houses, farms, companies, schools, and universities. You never hear that a dryer is a basic house appliance. We are now close to the end of November and the average temperature is around 30 C –– so I will let you imagine the summer temperature by yourself –– anything could be dry in a maximum of 15 minutes instead of using a dryer for clothes. When I rented my apartment, I noticed that there was a paragraph illustrating that the owner of the apartment could charge you a fine if you dry your clothes on the balcony because “that shows an uncivilized image to our community.”

Fifteen minutes in Arizona hot weather could hurt a passengers’ visibility while they are sticking their phones at their faces. Believe me, they simply will not notice anything while they are driving. The water heat system is also electric in Arizona, air-conditioners, garden lights, swimming pool heating systems etc. Every machine in the 299 days of sunny Arizona is electric in general. The USA contributes to pollution emission 11%, second after China.

My husband was involved in separating trash into two parts: the blue bin for recycling, and the black one for other waste and recycling items that he forgot to send to the blue bin.

Every 2-3 days when I put the bins out I found vegetables, fruits and eggs shells in the blue bin. When I asked him why he put it here he replied “come on this for fertilizing soil, and you know nobody gonna know,” as the IG trend voice.

The argument has begun repeatedly from then until now, however, nobody is going to know, which is not a big deal as we are just some amongst millions. What we know for sure, is that our planet is burning and it is because of how we behave, damaging our resources, and being extremely selfish. But nobody is going to know.

The motherland has only known suffering for hundreds of years. However, COP26 consistently came to the meetings with an agenda, the same one that has been used in previous years, warning, shouting, and having demonstrations outside of the building the meeting was held in. They were warning people in their speeches of the terrifying future: that areas will disappear sooner than what they think. This is similar to what Borris Johnson illustrated in the United Nations Climate Change Conference in Glasgow, Scotland when he said, “when the temperature rises only 4 degrees, we will say goodbye to entire cities, which are Miami, Alexandria, and Shanghai. They will all sink underwater.”

If my apartment leaser will create a third bin for waste food I promise the recycling process will be easier in my house. Who knows, maybe that will encourage Arizonians to plant on their balconies and cause less visual harm underneath hanging clothes to dry then consuming less energy.

Yes, we are now separating the waste perfectly and starting to refill plastic water bottles, drying half the load and letting nature continue the process inside the apartment.

ASU has a significant role in saving energy by reducing plastic systems and adopting a solar energy program. It is responsible for over 50 MWdc equivalent solar generating capacity development, I was surprised how the classrooms stay moderately cold while the weather outside around 108 degrees F. Stability in the cold – i.e. ASU’s heating system – was one of the guidelines issued to reduce the amount of energy consumed by making sure that the temperature was no higher than 68°F, and cooled to no lower than 78°F. ASU is a role model in Arizona as they have launched promising initiatives and have a deep awareness of climate change, all of which will leave a huge impact. This is a legacy that other institutions should strive to replicate by following in ASU footsteps and making the necessary changes. ASU has helped to save a beautiful and unique desert in the USA from severe environmental changes and abuses.

Tasneem Amro is a correspondent and media consultant with experience as a reporter, filmmaker and radio narrator. She earned a bachelor’s degree in media and TV production and is working on a master’s in European Studies from Heinrich Heine University. Amro has covered events affecting the West Bank, including the 2006 Palestinian presidential election and legislative elections. She has extensive experience in filmmaking locally and internationally, and has worked with trainers from the BBC, DW Akademie, Al Jazeera Training Centre, RFI, France 24, and others. During her time as a Humphrey Fellow, Amro hopes to develop her multimedia expertise to produce regional stories when she returns to her country.

View all posts by Tasneem Amro →