If a quick survey shows that the word ˝coffee˝appears on Twitter around 20% more times in Austin than in New York on a March morning, it can be the sign that the major creative potential of the USA shifted to Texas for a regular annual gathering. The joyful speculation by Chris Busse during his very serious presentation – Analyzing Trends With Social Media  APIs – describes lively the spirit of the event I have attended these days.

South By Southwest Interactive was held from March 11-15, SXSW Film and Music are still on. It is my first time at the Conference on its 18th birthday, so I can’t tell how was it before, but now the main impression is: huge.

In the Austin Convention Center and 9 alternative sites, at all hours you have to pick between some 50 choices: solos or duals, panels or core conversations, keynotes or workshops. But it depends very much on your background and interests, as the program is divided into sections: Design & Development, Greater Good, Business, Emerging, Future of Journalism and Content Strategy, Work and Happiness, Late Break, Social Graph.

Here are some the titles of my choice: Bloggers vs. Journalists, Secrets of Interactive Reporting, Crowdsourcing: Innovation and/or Exploitation, Wikileaks – the WEB, and the Long, Strange Journey of Journalism, Finding Interesting User-Generated Content, Will News Apps Re-invent Journalism?…

Among the distinguished keynote speakers I loved the cool young founder of 4Chan  Christoper Poole, 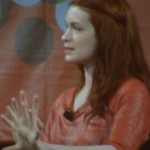 the bright brave actress and producer of the web series The Guild  Felicia Day.

But most of all 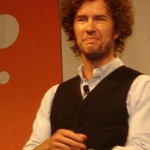 the active better-world-making businessman Blake Mycoskie who invented the concept of giving away TOMS Shoes, and about whom I will certainly tell you more some other time.

It was hilarious to see face-to-face the Comedy Central New York Stand Up Show  star John Oliver during an open conversation before his show. 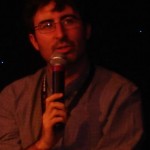 Gaming and podcast news released are simply uncountable. So are evening events, and in Austin Downtown, they can be pretty long.

After all, the main benefit for me as a media person from this SXSW, that I would like to share, is a clear answer to the question made by the conversation entitled Why Journalists Need to Think Like Geeks. Because, my dear friends and colleagues, we smply have no other choice if we want our profession to survive in the world of new media that is just being created.