A tragic incident has happened in Maldives, when a school’s principal and four students drowned while on a school trip to one of the islands.

You can read up about it here.

For Maldives, such incidences have far reaching impact, mostly due to the small community in which we function in.

We may be a country, but in terms of our associations with one another, we function as a close knit village.

My heart goes out to the families and friends of the victims, especially to those of principal, Nazim, who I knew, as he was in my sister’s high school class.

May God bless his soul.

Reports on the incident state that:

Nazim attempted to rescue eight students who found themselves in trouble, and was able to save four before he died.

This I think spoke volumes about the kind of person Nazim was.

Their batch is one of the most strongly bonded groups I have ever seen, as was further evidenced by their most recent reunion that they had just last July. 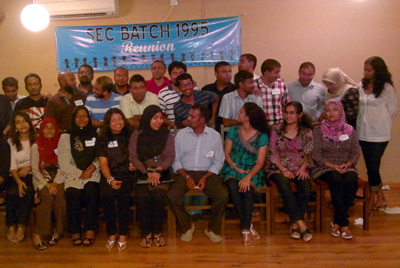 I was at this event, as both the MC and also filling in for my sister, who is out of the country.

I am very close to all those in my sister’s class, though I will always be known to them as Mirfath’s kokko (brother), which was what my name tag read on that night.

It is to this group of people that my heart goes out to the most, as I was reinforced anew on that night, the camaraderie they had.

Ever since I was in elementary school, I have been seeing how my sister’s class always came together to celebrate numerous occasions, all the while having the greatest times together.

And they are still maintaining this, 16 years after they graduated high school.

One of my friends, and from the same batch, Amyna, posted this as her Facebook status.

Nazim played the part of a superhero on our Centerpiece show [the biennial school concert].

After reading the news, I truly believe he was a real life hero today.

This would indeed be a tragic loss for their class, and it is to them I dedicate this post to.