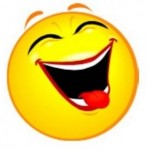 I used to crack jokes and laugh so much with my colleagues back in Geo Television,Pakistan.Even though most of the times due to the pressure of work and seriousness of job,we had had not this environment of sense of humor at the work place.If I did it,it was personal endeavor with the least output or sometimes even reaction from my colleagues.The sense of humor was not reciprocal rather sometimes it was the I who shared a joke and usually I was the one out of 3 people to laugh at it with an exception of my Non Linear Editor Faisal whose sense of humor I still miss.Rest all were too serious to talk to,though I used to drag them forcibly to laugh.
After coming to the USA and during my three months of stay I have realized that Americans have good sense of humor.This I witness not only at informal but formal level too.I really enjoyed one day when I went to see him and so far I also know now his other colleagues so we started to exchange jokes in such a manner that I later on realized that how such environment can make the difficult things easy to say.How such interaction can make the life easy.
I really like this sense of humour aspect in Americans,as I also enjoy it.