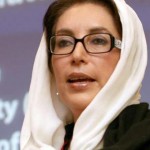 Today I was filled with the memory of Former Late Prime Minister of Pakistan’Benazir Bhutto’while Nesima was giving the presentations on the leaders she had chosen.

Out of the six leaders,Nesima talked about four of them were women:Oprah Winfrey,Queen Rania of Jordan,JK Rowling and Moneza Khokhar.None of them were stateswomen,but the positions they possess in their fields ostensibly make them distinctive.

I remember my Editor once sharing his thoughts in our weekly meeting about the performance of women vis a vis men.He shared from his experience that he found women more dedicated and focused in the work.He even explained the impact of recruiting more women in the newspapers as it increased the speed of the work and also the quality as compared to the time when there were less women in the newspapers.He has the same opinion about me as I used to handle all the work and performed more tasks in short period of time in comparison to my male colleagues.

Look at the Humphrey Fellows of this year in Cronkite School and even overall more than 50% of them are women.Condoleeza Rice ,Hilary Clinton,Dilma Rousseff(Brazilian President), Laura Chinchilla Miranda(Costa Rican President),Pratibha Patil(Indian President),Hina Rabbani Khar(Foreign Minister of Pakistan);I know I am not naming some other leading women Figures but all these women are great examples of women leadership and doing phenomenal tasks.

The common charateristics that I found in Nesima’s presentation about the women as leaders was the determination and the will to change the world.They all have a vision in their lives and that is to fight with the status,which is an impetus to drive any leader to fulful the vision.When it comes to the women as leaders,they can not only think about the implentation of their vision with the mind of a brave soul but also with the heart of mother which has no substitute in this world.And all her presentation many a times reminded me of our woman leader in Pakistan’Benazir Bhutto’,who was the first Prime Minister not only in the history of Pakistan but also in the Islamic World.She had the charisma and the vision to do something in her life for the country,unfortunately now only her charisma lasts but vision has diminished.

When Benazir Bhutto returned Pakistan in 2007 after 10 years of exile;she certainly had some roadmap for Pakistan.She always spoke so beautifully about seeing Pakistan as an emerging power.Her death has left a vacuum,which is not easy to fill but has opened the ways for entry of new women leaders in Pakistan,which I think will usher Pakistan in the new era where women can work to make the country from better to the best.