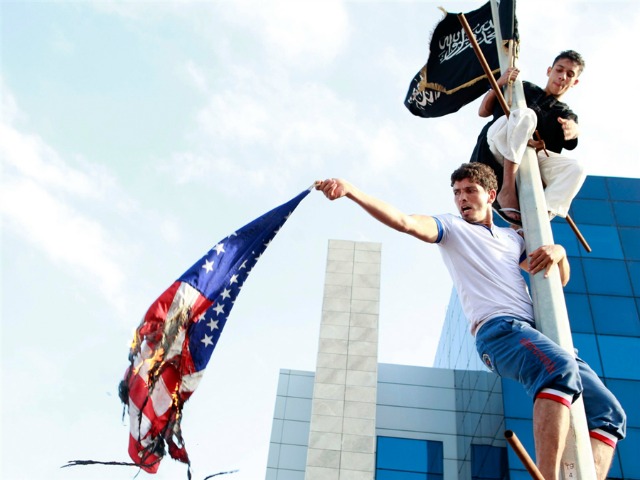 couple of weeks ago around 6 something in the morning while i was hangover sleep, my mobile rang
-yes who is it
-hello Kareem its dr. Bill did i wake you up
-no no problem i was about to wake up already (lier)
-have you seen the news, there has been demonstrations in muslim countries against the US because of a movie about the Muslim Profit Muhammad for that am asking you do you mind to make few interviews to speak about that issue
– yes sure would love
– ok meet me in the office within an hour

after an hour my phone rang again

– yes!
– Kareem! did I wake you Again? (have you waken me before!), I thought we are supposed to meet in the office by now, however am calling because I have -received request from a channel that wants to interview you.
– Oh! thats a good new. I will get dressed and come to the office soon

and hardly I did, I went to the office puffy, hangover, messy and “clinically asleep”
Dr. Bill Silcock was in his office very energetic and cheerful (as usual)
– it has been a dreadful news the attacked the US embassy in Libya and killed three people
BAM
OH MY GOD
this is going to be massive, I agreed when I was deadly asleep and intoxicated to speak about a protest, now I will be speaking about
murder!
in public TV!
In the US!
where their Consul was killed!
And I am Arab!
Yes It my job is to be able to talk with any one, any time, any where, any how
usually in situations like that people tend to go on one of two directions
1- offer apologies and try to absorb the anger
2- being the defender speaking on behalf of the good people in his country
I have chosen neither of them
I want to speak about something else, I want to talk about
“WHY MUSLIMS AND AMERICA DONT GET ALONG”
to do that you have to go back with me 2 years exactly in July 2008 I was invited by the American Embassy to come to the states in a program that is called IVLP “international Visitors Leadership Program” in order to be oriented in the american system in a quick brief way , Personally I love traveling and I did have a good share in seeing other countries and cultures, yet I have never ever had any intention about seeing the US, actually because I had the feeling that I know every thing in the US from movies, book, TV programs, or internet so I will not be surprised or entertained
I am sure the US is nothing more that a bunch of Sexoholic, Alcoholic, Violent people living in tasteless long skyscrapers buying guns from the supermarket, and killing and people out of being bored and above all their major goal is to destroy any thing related to ISLAM
but when I received the invitation I said why not
usually when I travel I have a big fat family list of things they want,
this time when I was going to the states I had a big fat egyptian list of thing not to do in the states, be cautious, don’t be late,keep cash money with you just in case some wants to rob you.
(What!)
all that noting that my mother used to go to the American University in Cairo and my parents travelled to almost half the glob (of course the American Continent was not included)
I took the plane and went to Frankfurt for a quick trip then I took over from there to Washington DC.
It was such an exhausting trip, know they where true in the geography class to say that Egypt is in the middle of the world, usually its 3 hours and am in Europe, Assia, Or deep in Africa
this was not less that 13 hours flying time
when I landed I remember the I saw what I wast Expecting

View all posts by kareemawadalla →

3 Comments on “Why Muslims and America Don’t Get Along”