I really wish political parties didn’t play such a strong part in people’s opinions. In watching the second debate with Romney supporters, watching the final debate with Obama supporters and monitoring Twitter during all three, it’s difficult to draw any conclusion other than this: political affiliations largely cloud people’s judgment. I understand believing in what one’s party stands for, but completely blocking out what the other party has to say seems too narrow-minded to be helpful in political elections. I’ve seen Romney supporters ignore and deny good points brought up by Obama during the debates and I’ve seen Obama supporters laugh and scoff at Romney’s remarks, and both barely listened to what the other side was really saying.

As a sports fan, I understand the balance between commentary, analysis and being opinionated or biased. I like to think I know how to offer insight without being affected by my own interests and favorite teams. I really wish more people saw politics that way. Both candidates present themselves well (for the most part) and it’s a shame to see so many people disregard what another candidate has to say just because they are a Republican or a Democrat. This may be easier for me to say since I don’t have a political affiliation and because I’m a journalist who understands the value of being unbiased when I write about something, but I really hope we take the time to appreciate how important it is to not make decisions based simply upon what their political party is.

Moving on to the actual debate, the two things people made note of the most on Twitter was that Romney’s smirk was still slightly creepy and Obama was still a little condescending. Many thought Obama was lifeless in the first debate and it seems he saved all his zingers for the final debate. Romney was much more peaceful in comparison and agreed with a lot of things Obama said. I feel like both displayed some different leadership qualities, but that’s a lot easier without a (much-needed) fact-checker letting the public know which comments are accurate and which are untrue. But again, the point of these debates seems to be how the candidates make their points rather than what points are being made. My final point is about Bob Scheiffer, who deserves recognition for being the best moderator out of all three debates. He let the candidates talk when they were on to something and brought them back down to earth when they started to ramble. The third political debate was a draw in my book, as Obama was strong in the middle but Romney made some good comments throughout. I know I don’t have the greatest political insight, but I’m definitely proud of the fact that I’m not blinded by any political affiliation like some people unfortunately are. 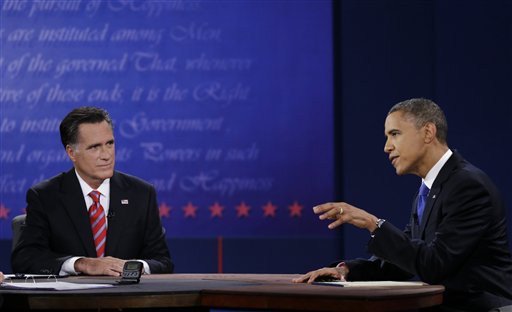